What have ye to do with me, coasts of Palestine? The Palestinian: Great March of Return Bible in the News Video Post The Palestinian “Great March of Return”
What have ye to do with me, coasts of Palestine?

This week has seen further clashes along the Gaza strip between the Palestinians and Israel. We review this in the light of Bible prophecy and consider how accurate the prophets of old have been in describing the current tensions in the region.

Welcome to Bible in the News. This is Matt Davies joining you.

Clashes on the Gazan border

For the last five Fridays Palestinians have gathered to the fences marking the border with Israel and attempted to march into Israel. They have burnt tyres, thrown stones and other weapons. Photos released by the IDF show Gazan protesters attempting to dismantle the fence. 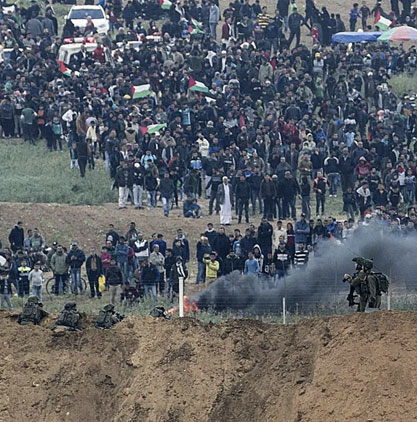 Palestinians clash with Israeli troops along the Gaza boarder
Source: The Independant

The protest is supposed to last up until May 15th which was the day that Israel declared itself an independent state in 1948, 70 years ago. The Palestinians call this – Nakba Day, the day of the catastrophe. The protest has been labeled the “Great March of Return” and the demand is that so-called Palestinian “refugees” and their descendants be allowed to return to what is now Israel.

The protests have been organised by independent activists but have also been endorsed and supported by Hamas, the terrorist organisation which rules the Gaza strip.

The ‘Times of Israel’ also ran a report entitled “IDF says ‘hundreds’ try to breach Gaza fence; 3 killed, over 300 hurt in clashes”. In it it states:

“The Israeli army says its troops only open fire at demonstrators who engage in violence, or who attempt to breach the barrier separating the territory from Israel. Palestinian videos have emerged that purport to show soldiers shooting protesters who did not pose a threat. The army has accused Hamas of fabricating video footage or releasing only partial clips. The military also says Hamas is using the protests as cover to damage the border fence and prepare to infiltrate and carry out attacks.” 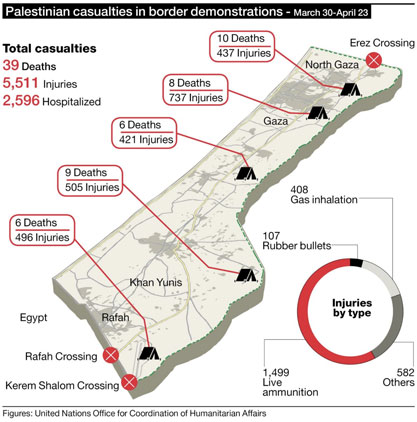 Tensions are high and are set to escalate as we approach Israel’s independence day. However, from Bible prophecy we can expect the peoples of the Gaza strip to remain where they have been placed for the prophecies to unfold as described in the Bible.

The Palestinians in Bible prophecy

The Bible has much to say about the time period we are living in today and hints at the situation with the Palestinian people in Gaza.

According to the prophets at the time of the end and of Christ’s return, there is to be a hostile people to the West of Israel dwelling along the coast.

Consider this prophecy which speaks of the return of the Lord Jesus Christ, the son of David who was the son of Jesse:

And in that day there shall be a root of Jesse, which shall stand for an ensign of the people; to it shall the Gentiles seek: and his rest shall be glorious… And he shall set up an ensign for the nations, and shall assemble the outcasts of Israel, and gather together the dispersed of Judah from the four corners of the earth…. But they shall fly upon the shoulders of the Philistines toward the west; they shall spoil them of the east together: they shall lay their hand upon Edom and Moab; andthe children of Ammon shall obey them.
Isaiah 11:10-12

This prophecy is yet to occur. It speaks of the future when Jesus Christ has returned and is setting up his Kingdom in Israel. We learn here that as Israel return they will “fly upon the shoulders of the Philistines toward the west”. It would seem therefore that this is a prediction of a people to the West of Israel who are hostile to them.

In Joel 3 we have a prophecy about Armageddon and the attack of the nations on Jerusalem before the return of Jesus (see Revelation 16, Ezekiel 38, Daniel 11 and Zechariah 12-14). In Joel 3 we get a hint of an antagonistic people who reside on the coast:

“For, behold, in those days, and in that time, when I shall bring again the captivity of Judah and Jerusalem, I will also gather all nations, and will bring them down into the valley of Jehoshaphat, and will plead with them there for my people and for my heritage Israel, whom they have scattered among the nations, and parted my land. And they have cast lots for my people; and have given a boy for an harlot, and sold a girl for wine, that they might drink. Yea, and what have ye to do with me, O Tyre, and Zidon, and all the coasts of Palestine? will ye render me a recompence? and if ye recompense me, swiftly and speedily will I return your recompence upon your own head;” Joel 3:1-4

So at the time when Israel has returned and been regathered the nations will attack Israel but will be judged by God. We are in this time now. The Jews have been regathered and Israel is celebrating 70 years since the establishment of their state in 1948. Note here how the prophet is compelled to condemn “the coasts of Palestine”. This indicates there are a people there who are not supportive of God’s people of Israel.

How amazing it is that the prophets of the Bible foresaw long ago the tensions we are witnessing in the news today. This gives us great confidence in the scriptures of truth.

The prophecy of Ezekiel 38 sets out a picture of the time just before the attack of the nations on Israel. In it, it describes Israel as being at peace.
It mentions “the land of unwalled villages;” and the people as “them that are at rest, that dwell safely, all of them dwelling without walls, and having neither bars nor gates,” (v11).

It would appear therefore that somehow a temporary peace is to be reached. How will this come about we wonder?

Current events with America could prove to be the key. In December last year, Donald Trump declared that America was going to recognise Jerusalem as the capital of Israel. This caused international uproar. However, it would appear this was done to help further peace talks as it has taken the question of Jerusalem off of the table as far as America is concerned.

On April 2nd Haaretz ran an article entitled “White House Officials Tell Haaretz Peace Plan Still on the Agenda – and Could Surprise Skeptics”. In it it is stated that:

“The Trump administration thought to recognize Jerusalem as Israel’s capital would ultimately push the process forward”. The report states that although the Americans knew that recognition of Jerusalem would cause initial anger on the Palestinian side, later down the road it would make negotiations easier for peace. Apparently the Americans have been speaking with Saudi Arabia and have a plan which they are putting together.

On Saturday 27th April the Jerusalem Post ran an article entitled ”Abbas Sets conditions for hearing out Trumps anticipated Peace Plan”. Within it, it stated, “Multiple White House officials have recently said the Trump administration is finalising its plan to resolve the Israeli-Palestinian conflict.” 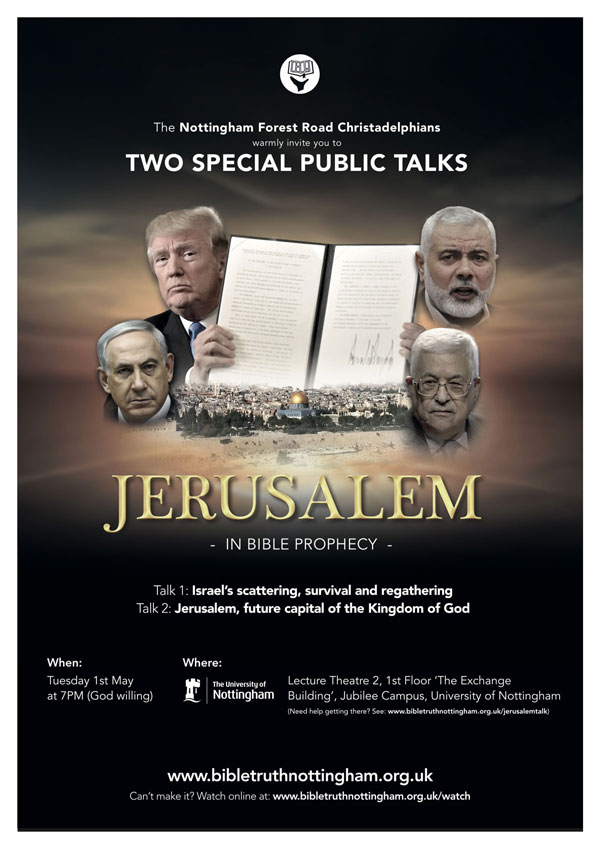 Tune in on the 1st of May at 7PMGodwilling for two special talks on Jerusalem in Bible Prophecy.

So we watch and we wait as we see world events bringing the nations into position just as the Bible predicts. These events herald the soon return of Jesus Christ and the establishment of God’s Kingdom on the Earth.

If you are interested in these matters and wish to find out more, the UK Nottingham Forest Road Christadelphians are held two special talks at the University of Nottingham. The overall theme was “Jerusalem in Bible prophecy” and there are to be two talks:
1. Israel’s scattering, survival and regathering
2. Jerusalem, future capital of the Kingdom of God The owl—unique and perfect design: Evidence of Design in The Creation

The owl—unique and perfect design.  David Burges FROM ANCIENT TIMES owls have been a source of fascination to mankind. For… BASIC BIBLE PRINCIPLES THE PROBLEM OF SUFFERING Evil and suffering We live in a world of evil, which brings with… The Three Deceivers of the Faithful: 3 x Vidoes Written in 1849 By John Thomas – it could have been written yesterday!

This amazing letter was written in 1849, it could have been written yesterday! Brother John Thomas’ letter to HM Government… Common 2015 Theme: Against My People Israel

As the world reflects on 2015, a common theme appears: Terrorism. Yet the world focusses its rebuke on Israel.  Click…