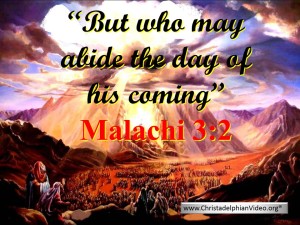 One of the mysteries of these latter days is the refusal of many Biblically well educated and God-fearing men and woman, to accept the testimony of the Bible, that there will be a literal and actual second coming of the Lord Jesus Christ, when the graphic evidence is available.

The Lord Jesus leaves us in no doubt of His second coming for we read in Matthew 16:27….“The Son of man shall come in the glory of the Father with his angels; and then he shall reward every man according to his works..” The reward the Lord Jesus speaks of, is the reward Paul wrote of…“The gift of God is eternal life through Jesus Christ our Lord.” (Rom 6:23) To make sure we understand this simple concept, the Lord Jesus wrote through the Apostle John in Rev 22:12….“Behold I come quickly and my reward is with me to give every man according as his work shall be.” In the face of such overwhelming yet simple proof, how can we fail to accept the fact that the second coming of the Lord Jesus is one of the basic promises of Scripture. The New Testament confirms the old…Jesus confirms both.

PROPHECIES OF HIS FIRST COMING:

The House of Israel always understood from their own books of the Law, the Psalms and the Prophets, that Messiah would come…..it was a basic promise from their God and the last Prophet of old Testament days, Malachi, wrote to them saying….“The Lord whom ye seek shall suddenly come to his temple, even the messenger of the covenant, whom ye delight in: behold, he shall come, saith the Lord of Hosts.”(Mal 3:1)

Some of the most dramatic Scriptural proofs of the Lord’s first coming, (and indeed His second coming) are to be found in Isaiah 7:14 and Isaiah 9:6-7….“The Lord himself shall give you a sign; Behold a virgin shall conceive, and bear a son, and shall call his name Immanuel”. The dramatic fulfilment of these promises was lost on Israel. for they looked for a mighty ‘warrior-deliverer-Messiah’, not the ‘Lamb of God slain from the foundation of the world’. Sadly, Israel temporarily turned their back on the one who would be their deliverer.

PROPHECIES OF HIS SECOND COMING :

One of the most dramatic prophecies of the Lord Jesus’ second coming, was provided by the Lord Jesus to John, who wrote about it in Revelation 1:7…“Behold, he cometh with clouds; and EVERY eye shall see him, and THEY ALSO which pierced him: and ALL kindreds of the earth shall wail (mourn) because of him, Even so, Amen.” There are many confusing theories concerning the Lord Jesus’ second coming, but this evidence is uncompromising . He IS coming again and EVERY one will see and know it is Him, including Israel and Rome. As well, all nations on earth will finally ‘mourn’ for Him and accept Him as King and ruler.

The Apostle Paul describes the second coming of the Lord Jesus…“The day of the Lord so cometh as a thief (unexpectedly)….but ye brethren, are not in darkness, that that day should overtake you as a thief.” (1 Thess 5:2,4) The very fact that Paul pointed out to the Thessalonians that they were ‘not in darkness’ highlights the fact that some would be, and that state of unbelief is wide spread amongst religious communities which look for their ‘reward’ in heaven, not ‘in Christ’ on the earth. Read the ‘song’ of the redeemed, “Thou hast made us unto our God kings and priests: and we shall reign ON THE EARTH.” (Rev 5:10)

WHY IS IT NECESSARY FOR HIM TO COME?

In Luke 17:27 we find sure evidence provided by the Lord Jesus, of the flood of Noah’s day, brought on the earth because of mankind’s wickedness and refusal to accept the Father’s simple concepts of righteousness. The Apostle Paul, in 2 Thess 1:7-8, speaks of a second judgement on people and nations who again refuse to obey the Father’s call to simple righteousness.. “The Lord Jesus shall be revealed from heaven with his mighty angels, in flaming fire taking vengeance on them that KNOW NOT GOD, AND THAT OBEY NOT THE GOSPEL OF OUR LORD JESUS CHRIST: who shall be punished with everlasting destruction….” BUT…it is not all gloom and doom. Revelation 20:4 gives us a glimpse of many who, are described in Heb 9:28 as looking for the Lord’s second coming for salvation…”They lived and reigned with Christ a thousand years.” “THEY” are those who are rescued from eternal death by belief, faith, works and baptism into the saving name of the Lord Jesus Christ.

WHAT WILL BE CHRIST’S FUTURE ROLE?

The lamb of God who came unto His own and they ‘received him not’ (John 1:11) is the one to be given the ‘throne of His father David’. (Luke 1:32). The meek and mild Nazarene, who ‘opened not His mouth’ (Isaiah 53:7), is the one who shall ‘roar out of Zion’ (Joel 3:16). On the day on which the Lord Jesus was crucified ‘the earth did quake and the rocks rent.’ (Matt 27:51) and on the day when He returns to ‘receive the kingdom’ (Luke 19:15) there will be a mighty earthquake in the Land of Israel and the ‘Mount of Olives….shall cleave in the middle’ (Zech 14:4). The Prophet Micah describes what happens when “the house of the Lord shall be established (in Jerusalem) ….and many people shall flow unto it……..for the law shall go forth of Zion and the word of the Lord from Jerusalem…..he shall judge among many people and every man shall sit under his own vine and fig tree; none shall make them afraid.’ (Micah 4:1-4)

HIS SECOND COMING …IT’S MEANING TO US :

In the fourth paragraph of this article we quoted ..”The gift of God is eternal life”(Rom 6:23) and the words of Jesus in Rev 22:12..“Behold I come quickly and my reward is with me to give every man (and woman) according as his works shall be.” A life of devotion to the Father and His Son can result in the gift of immortality. The Bible shows conclusively that we do not have any spark of immortality now, but the Lord Jesus may bring it to us when He comes. “When Christ who is our life, shall appear, then shall ye also appear with him in glory” (Col 3:4). The evidence and promise of His coming cannot be ignored.