“And there shall be signs in the sun, and in the moon, and in the stars; and upon the earth distress of nations, with perplexity; the sea and the waves roaring; Men’s hearts failing them for fear, and for looking after those things which are coming on the earth: for the powers of heaven shall be shaken.”

“Distress of nations with perplexity,” that is the phrase which sums up the world today. That word “perplexity” is defined in Strong’s Concordance as “a state of quandary.” According to Vine’s Expository Dictionary the word literally means “at a loss for a way;”–at a loss how to proceed. A practical dilemma. And that is where the nations are at the end of 2008. 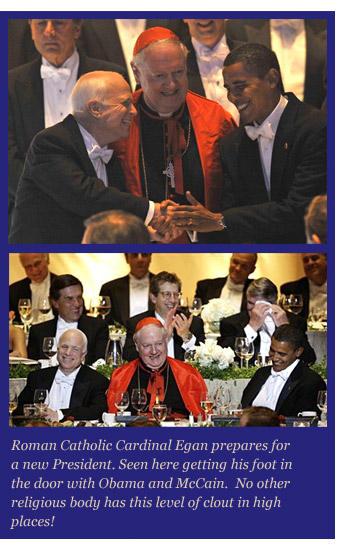 As the world looks forward to the year 2009 there is little hope of solutions. Scanning some headlines we note that Russia is threatening to cut off gas supplies to the Ukraine, Israel is all set for one of its military strikes into Gaza (it has been done before and solves nothing), and the world economy is continuing its nose-dive. Pakistan is calling up its forces due to tensions with India–and in fulfillment of prophecy the Roman Catholic Church is becoming more influential in the world and its affairs.

As we watch the years go by, we may wonder as others have done: “How long?” Now there are several time periods given to us in the Bible which many have pondered over, some of these relate to the period of Israel’s scattering and to the appointed time of papal domination. In the language of Daniel 7:25; it is “a time and times and the dividing of time,” or in chapter12:7 “a time, times, and an half” which doesn’t make too much sense until you find the same expression appearing in Revelation 12:14. This is a period during which the believers are “fed” (Revelation 12:6) or “nourished” (verse 14). By comparing the passages it will be seen that “a time, and times, and half a time” translates into 1,260 prophetic days.

Without going into more detail on that, the fact is that many have considered this period of 1260 day-years to be the time when the papal power would dominate both the true believers and the nation of Israel. The great question has been, when does the period commence–and more to the point, when does it end?

Over 320 years ago Peter Jurieu wrote his remarkable book on “The Accomplishment of the Prophecies.” In this book he makes reference to one writer who thought that the 1260 should be dated from the rise of the popes temporal power–that is his reign as a king over territory. Dating this beginning of the papal temporal power from about the year 755 A.D. Jurieu comments:

Robert Flemming writing in 1701 had this to say about the year 758.

“Now, if we make this the era of the papal kingdom, the 1260 years will not run out before the year 2018, according to the computation of Julian years; but, reducing these to prophetical ones, the expiration of the papal kingdom ends exactly in the year 2000, according to our vulgar reckoning. And if what I suggest above be true, that Antichrist shall not be finally destroyed until the coming of Christ, then may this calculation be looked upon to be very considerable.”

Yet another writer is mentioned by Islip Collyer who says:

“It is true that some old expositors, while agreeing that 1260 years was the appointed period for Papal domination, argued that the measurement should be taken from the time when the pope reached the plenitude of his power and received the patrimony which was the basis of his temporal sovereignty. Robert, lord bishop of Clogher, took this view, writing in 1745, and thus did not expect the final end until about the year 2012.”

From the Revelation we learn that the papal power will be very strong at the time of the end. Revelation 18:7 depicts this system as congratulating itself:

“…for she saith in her heart, I sit a queen, and am no widow, and shall see no sorrow.”

This is what we see today as the Roman Church enjoys a privileged position with world leaders. But her end is due–2012, 2015 or 2018? Well, we know that we are entering that epoch when the end will come–when Israel’s  scattering will have been accomplished and when the great false church will fall from her pinnacle to be dashed into pieces after the example of Jezebel.

The world is in a state of perplexity and has no way out–and will find no lasting peace so long as the whoredoms of Jezebel and her witch crafts are so many–see 2 Kings 9:22.

Only the righteous King of the Jews can bring peace to this world–and that is what we pray for.