The mountains of Israel”. Where and why is it important?

Print
July 26, 2019 – Audio, 7.37 MIN
(Links at bottom of page to download free viewers.)
This week we look at what and where are the “mountains of Israel”, an expression we often read of in the book of Ezekiel. Why is this area singled out in prophecy, separate from the rest of the land of Israel?

In Scripture we often read of the “mountains of Israel”, especially in relation to Prophecy. In Eze 34 we read of a prophecy of the return of Israel to these mountains;

“And I will bring them [Israel] out from the people, and gather them from the countries, and will bring them to their own land, and feed them upon the mountains of Israel by the rivers, and in all the inhabited places of the country.”

And I will make them one nation in the land upon the mountains of Israel and one king shall be king to them all: and they shall be no more two nations, neither shall they be divided into two kingdoms any more at all:

Thou [Gog] shalt fall upon the mountains of Israel, thou, and all thy bands, and the people that is with thee: I will give thee unto the ravenous birds of every sort, and to the beasts of the field to be devoured.

These passages were what influenced John Thomas to write in Eureka

“there will have been a considerable gathering of Israelites upon the mountains of Israel before the invasion of the country by Gog, and his capture of Jerusalem.”.

So the question that we have is what area is this, the mountains of Israel?

Well we first read of them in Joshua 11:21 when Joshua is taking the land of Canaan for Israel.

And so what we see here is that this area, the mountains of Israel, was inhabited by the children of Anak, the Anakim, and specifically, Hebron, Debir and Anab. 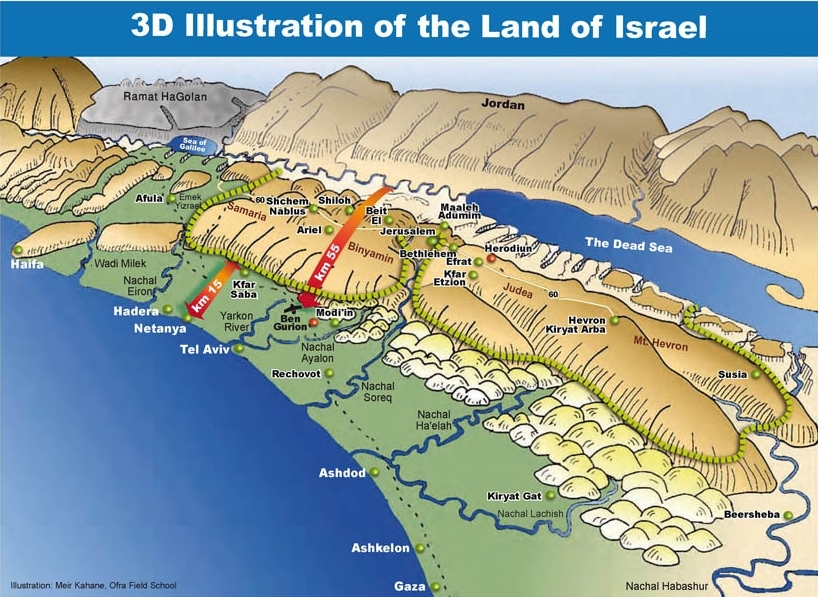 In 1948, after the State of Israel was declared Israel was invaded on multiple borders. The only country that made much progress against the new state was Jordan, which took control of the majority of this area, meaning Israel did not at this time have control of the mountains of Israel. Jordan annexed the area and referred to it as the West Bank – the area west of the Jordan river.

The Jews that settled in this area the Jordanians expelled, meaning that this prophecy of Israel being fed upon the mountains of Israel was still unfulfilled despite there being the State of Israel being established. This remained the case until in 1967 Israel took this area which it has held ever since.

Since this time Jews have started to settle again in the mountains, in the West Bank. However, because of the difference in history of the area to the rest of Israel, Israeli ownership of the area has become a controversial issue. A simple planning application for a new house in this area has been known to reach the UN Security council.

So, do we see today a “considerable gathering of Israelites upon the mountains of Israel”?

Well what we do see is a ever growing number of Israelis on these mountains, only a few days ago a report by Peace Now – an anti-Israel and anti-settler group – released a report saying that since Obama left office Israeli settlements in these areas have boomed. The report said that Trump’s friendly attitude to Israeli settlement growth has led to a huge increase to already rapid settlement growth. Trump’s ambassador to Israel recently told the New York Times that he believed Israel had the “right” to annex some of the West Bank, upsetting many who oppose Israeli settlements in the area.

And we know that it will be after that time that Jerusalem will exalted to the top of the mountains, when all nations will flow unto it to worship in the temple.

This has been Paul Barnes joining you for this week’s Bible in the News.

The readings for today, September 27 are: 1 Chronicles 10
Ezekiel 23
Luke 20
Our website uses cookies from third party services to improve your browsing experience. Read more about this and how you can control cookies by clicking "Privacy Preferences".
X
X