Print
March 25, 2018 – Audio, 10.45 MIN
(Links at bottom of page to download free viewers.)
The division in the Middle East between the north and the south is been acentuated this week by a number of significant events around the world. In the United States, John Bolton has been appointed as National Security advisor. John is against the Iranian nuclear deal and is heralded as a great supporter of Israel. Ex-Israeli defence minister Shaul Mofaz today said in the past John Bolton pushed for Israeli strike on Iran. This quick change in the American administration follows the sacking of Rex Tillerson as Secretary of State. Rex supported the Iranian nuclear deal, while his replacement, Mike Pompeo is adamantly opposed. Also this week Israel suddenly claimed responsibility for destroying a nuclear facility in Syria on the Euphrates river in September 2007. Why the announcement now? Most likely intended to be a warning to Iran about its nuclear facilities. There were also reports this week that Iran is constructing military bases in Syria near the Russians, in an attempt to deter Israel from destroying them.

Today in Syria both Russia and Iran are dictating events. Iran has operated in Lebanon for years through her proxy Hezbollah. But now Iran is acting directly on Israel’s doorstep. Not much can be done in Syria these days without the blessing of the Russians. 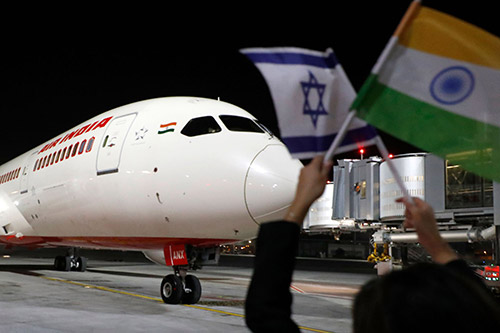 An Air India flight from New Delhi, arrives at Ben Gurion International Airport in Israel
on Thursday, after using Saudi airspace for the first time.

Saudi Arabia allowing Air India to use its airspace for flights to Israel, may not seem like a big event, but considering the last 70 years since the establishment of the State of Israel, it demonstrates a massive change. It is no secret that Iran is as much of a threat to the Saudi’s as they are to Israel and that Saudi Arabia would happily turn a blind eye to Israel using her airspace for an attack on Iran.

The assasinations in the UK, apparently by the Russians, were very audacious and aggressive on a foreign countries soil. Actions such as that indicate there is already a kind of covert war happening between Russia and some of the west.

Russian aggression, Britain being forced to react, President Trump in the United States believing that peace comes by strength, Iranian operations in Syria and the continuation of her nuclear program, the thaw in relations between Saudi Arabia and Israel, are all events coming together and accentuating the north, south division to the Middle East, as spoken of by Ezekiel and Daniel in prophecies relating to the time of the end.

The North South Division in Ezekiel 38

Ezekiel 38 is a contest between the “son of man” and Gog. “Son of man, set thy face against Gog”, the prophecy begins. Ezekiel, designated the “son of man’ is representative of the one who will set his face against Gog and destroy him. This is the Lord Jesus Christ and his resurrected saints. As the prophet says in Zechariah 14:5 “…the LORD my God shall come, and all the saints with thee.” In Ezekiel there is a questioning and opposition to Gog’s invasion of the mountains of Israel, a particular concern for the spoil that Gog has come for. This objection comes from Sheba and Dedan, Tarshish and her young lions. In the prophecy of Ezekiel 38 then, there are two groupings of nations laid out; a northern group and a southern group. The northern group is based in the uttermost parts of the north (verse 6, 15 – ASV).

Gog the King of the North

Gog is the prince of Rosh. Ezekiel 38:2 (ASV) “Son of man, set thy face toward Gog, of the land of Magog, the prince of Rosh, Meshech, and Tubal, and prophesy against him” The name in the Hebrew text “Rosh” has been identified by different Bible dictionaries and lexicons as Russia. Langenscheidt’s Hebrew-English dictionary says under Rosh: “Proper name of a Scythian people, Russians.” The lexicographer Gesenius says under Rosh: “Proper name of a northern nation, mentioned with Tubal and Meshech; undoubtedly the Russians, who are mentioned by Byzantine writers of the tenth century by the name Rus.” This is Kievan Rus.

In Ezekiel’s prophecy, with Gog in the invasion are Persia, Ethiopia (Cush), and Libya.

Sheba and Dedan and the Tarshish Powers

Sheba and Dedan are mentioned in Genesis 25:1-4, they are descendants of Abraham the patriarch and his wife Keturah. They are cousins to the Midianite children. (There is another ‘Sheba and Dedan’ mentioned in Genesis 10:7, where “Sheba and Dedan” are the descendants of Cush. However, in Ezekiel 38 Cush or Ethiopia is with the King of the North.) The lexicographer Gesenius identifies Sheba with the Sabaeans, a nation and region of Arabia. He supposes there were two Arabian tribes, Sheba and Dedan, one in southern Arabia and one based in northern Arabia. Smith in his Bible Dictionary identifies Sheba with the great south Arabian kingdom and the peoples which composed it. Werner Keller in “The Bible as History” identifies Sheba with the ancient kingdom of Sheba based in southern Arabia, which was a merchant power who did business with the Kingdom of Israel under Solomon – the queen of Sheba came to visit. him. It is quite certain then that Sheba and Dedan in Ezekiel 38 are the tribes and kingdoms of the the Arabian desert, which is modern day Saudi Arabia, Yemen and we could include the other nations of the Arabian peninsula as well.

The North South Division in Daniel 11

Earlier in Daniel 11 the King of the North was based in Syria and the King of the South in Egypt. In the time of the end however, when describing the King of the South, one must include Sheba and Dedan and the merchants of Tarshish. Issues of the Bible Magazine (Volume 20, Issue 3 and Volume 26, Issue 4 http://www.biblemagazine.com/magazine/vol-26/v26i4mag.pdf) deal in depth with the identification of Tarshish, as Great Britain and her allies.

Daniel’s prophecies of chapters 8 and 11 are more concerned with the Greek portion of the Roman Empire. So, the Roman king is depicted as a little horn that grows out of the Greek “king of the north” horn. The Eastern Roman Empire was at last destroyed by the Ottoman power and its base was transfered north to Moscow. So Moscow become the base of the king of the north as depicted by Ezekiel 38. Over the last few years we have seen Russia steadily moving south again, into the Crimea, Georgia and creating bases in Syria.

Gog and the King of the North are the Same

“And at that time shall Michael stand up, the great prince which standeth for the children of thy people: and there shall be a time of trouble, such as never was since there was a nation even to that same time: and at that time thy people shall be delivered, every one that shall be found written in the book. And many of them that sleep in the dust of the earth shall awake, some to everlasting life, and some to shame and everlasting contempt. And they that be wise shall shine as the brightness of the firmament; and they that turn many to righteousness as the stars for ever and ever.” (Daniel 12:1-3)

Come back next week God willing, to once again see prophecy fulfilling and the Bible in the News. This has been David Billington with you.