The Failure of the Two-State Solution:
There is no Scriptural basis for a Palestinian State in the Midst of the Land

Print
February 18, 2017 – Audio, 7.13 MIN
(Links at bottom of page to download free viewers.)
Hello, this is Paul Billington speaking this week from Jerusalem where a Conference has been held entitled “Realizing the Zionist Vision: Sovereignty with Responsibility – apply Israeli law to Judea and Samaria.” In effect, the discussion was about Israel possibly annexing the so-called West Bank.

This is the topic of discussion in the Israeli media at the present time, and it was given somewhat of a boost following the Trump meeting with Israeli Prime Minister Benjamin Netanyahu. Upon arrival in Israel a week ago we were greeted by a headline in the Jerusalem Post newspaper (February 8) which read:

Those are interesting and challenging reports which if followed to their conclusion, would bring the world right into the prophecy of Ezekiel 38, where the northern powers of Europe are seen invading “the mountains of Israel:”

“After many days thou shalt be visited: in the latter years thou shalt come into the land that is brought back from the sword, and is gathered out of many people, against the mountains of Israel, which have been always waste: but it is brought forth out of the nations and they shall dwell safely all of them” (Ezekiel 38:8).

It is interesting as well as important to note the fact that in the whole prophecy (chapters 38 and 39) there is no hint or mention of a Palestinian state. Ezekiel did not see a two-state situation. The focus is upon a prosperous people “that are gathered out of the nations, which have gotten cattle and goods, that dwell in the midst (navel) of the land” (Ezekiel 38:12). The focus is “the mountains OF ISRAEL.” 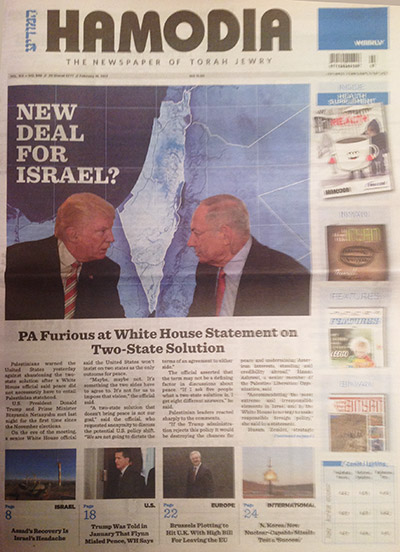 Sovereignty of the West Bank is the discussion in the Israeli media.

The Sovereignty Conference that we attended this week was a great success. The room was packed to overflowing. An announcement was made that “Everyone will get a seat – 100 more chairs are going out.” There was an air of excitement and expectancy. Several speakers were included who clearly saw that the time had come to annex the territories taken by Israel in 1967. Much was made of the fact that 2017 marked 50 years “of renewed Jewish presence in Israel’s heartland.” Speakers included Caroline Glick of the Jerusalem Post and Member of the Knesset Tzipi Hotovely as well as other prominent political leaders and journalists.

During the following two days the 14th Annual Jerusalem Conference sponsored by the news media organization Arutz Sheva was held. The proceedings commenced with an address by the President of Israel, Ruby Rivlin who clearly saw the need to apply full Israeli sovereignty over Judea and Samaria, as well as the unification of Jerusalem. The mayor of Jerusalem, Nir Barkat also followed the same approach along with several other speakers. But it has to be said that some speakers, including Herzog, took a different approach – one that favoured appeasing the Arabs (Palestinians) and the Left wing Israeli politicians. In response there has been a marked weakening of the push for annexation. It is a reflection of a divided Israeli society, and this was seen in remarks by U.S. President Donald Trump when he said that he could live with either a ‘one state’ solution or the ‘Two-state solution’ that has been favoured by previous leaders. The world’s media (and that includes the Jerusalem Post), tends to support the old Two-State idea. But the God of Israel will work out the fulfillment of His word in the process of time. Events can bring change of heart in political leaders, and of course, leaders can be replaced. It remains to be seen how long Benjamin Netanyahu can hang on to his position anyway. And who would replace him? We do not know, but one contender is Naftali Bennet. As the Jerusalem Post reported (February 16):

“The Israeli Right declared victory Wednesday night after US President Donald Trump declined to commit to a two-state solution to the Israeli-Palestinian conflict.

“Politicians on the Right ignored Trump’s call to limit settlement construction and instead focused on what they saw as most positive.

“The is the end of an era,” said Bayit Yehudi chairman Naftali Bennett. “The Palestinian flag has come down and has been replaced by the Israeli flag. The prime minister displayed leadership and daring and strengthened Israel’s security.”

“Culture and Sport Minister Miri Regev (Likud) compared US-Israel relations to construction in Judea and Samaria, saying that the era of freezes had ended for both.

Gradually – slowly but surely – and despite heavy opposition from many quarters, the situation is beginning to answer the requirements of Ezekiel’s well-known prophecy. Once again we see that the Bible is in the News as events take the shape seen by many for well over 100 years.

To keep up to date, join us again on Bible in the News next week. Other issues and comments will be dealt with in the next issue of the Bible Magazine, God willing.


We are always keen to receive your feedback, you may leave comments in the comments area below or alternatively email us at [email protected] and we will get back to you with a reply as soon as we can.