Will Britain have an amicable exit from the EU?

Print
April 1, 2017 – Audio, 10.33 MIN
(Links at bottom of page to download free viewers.)
Last Saturday a special EU summit in Rome, on one of the seven hills, commemorated 60 years since the Treaty of Rome, which established the European Economic Community that led to the European Union. The European Union’s remaining 27 leaders — without Britain — declared in a joint statement the EU to be “undivided and indivisible”. The prime minister of Great Britain, Theresa May, was absent from the gathered European leaders. 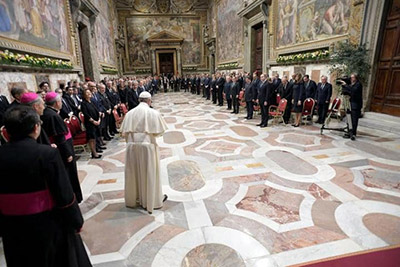 The pope addresses EU leaders at the Vatican.

The EU faces many challenges and bitter disagreements, with some even predicting a break up because of the departure of the UK from the block. However, the leaders of the most influential countries in Europe plan on moving ahead with all their power. The Telegraph summed up the Pope’s remarks with this headline, “EU risks dying, needs new vigour and passion, says Pope Francis”

Here are some more excerpts from the Telegraph report:

“Pope Francis told Europe’s leaders on Friday the continent faced a “vacuum of values” as they marked the EU’s 60th birthday, condemning anti-immigrant populism and extremism that he said posed a mortal threat to the bloc.

“Prime ministers and presidents from 27 EU member states have descended on Italy to mark the 1957 founding Treaty of Rome, receiving a papal blessing on the eve of the anniversary. …

“”When a body loses its sense of direction and is no longer able to look ahead, it experiences a regression and, in the long run, risks dying,” Francis told the leaders gathered in an ornate, frescoed chamber in the heart of the Vatican. …

“The Argentinian-born pontiff told the leaders they needed to promote Europe’s “patrimony of ideals and spiritual values” with greater passion and vigour.”

Essentially the Pope is calling for Europe to return to its Catholic roots, this is what he means when he talks of Europe’s “spiritual values”. The body of Europe can only prosper, in the pope’s view, if it is moving towards its Roman Catholic destiny. The fact that the anniversary of the European Union was blessed by the pope once again demonstrates that the EU is a Roman Catholic ideal. 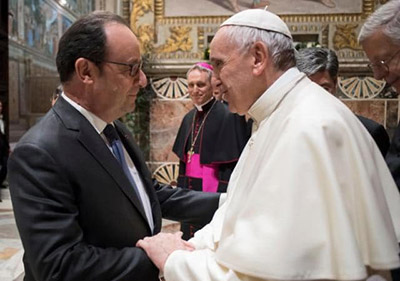 The Vatican is endeavouring to direct Europe towards a political union with “spiritual values” — Catholic values. Of course the pope would be the authority of those values, ideals and the direction of the political body. The pope likened the European Union of nations to a body, with a direction, a purpose and spoke of that body dying if it didn’t maintain its values and direction.

The Bible also likens the Roman Empire to a body, to a beast in fact. Also the other empires that preceded it are represented by beasts. These are found in Daniel chapter 7. The first beast was the Babylonian Empire, it is represented by a lion. Next there is the bear of the Medes and Persians, followed by the Leopard of Greece. Finally there is the great and terrible beast of the Roman Empire. Even though these beasts are distinct, they are really phases of the same empire. When Darius the Median conquered and took Babylon, Daniel chapter 5 verse 31 says he “took the kingdom”. This idea of the beasts representing different phases of the same empire, is confirmed by how they are depicted in Daniel chapter 2 as one image made of various metals.

The story of these beasts is continued in Revelation. This is easy to see in Revelation 13, where all the beasts in Daniel (lion, bear, leopard and dragon) are in some way part of the beast that John sees.

“And I stood upon the sand of the sea, and saw a beast rise up out of the sea, having seven heads and ten horns, and upon his horns ten crowns, and upon his heads the name of blasphemy. And the beast which I saw was like unto a leopard, and his feet were as the feet of a bear, and his mouth as the mouth of a lion: and the dragon gave him his power, and his seat, and great authority.” 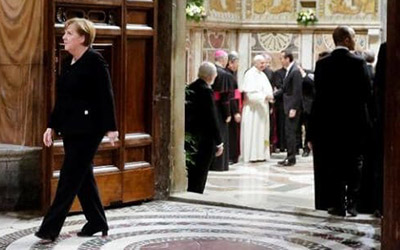 The German Chancellor Merkel leaves after a meeting with the pope.

Revelation 17 presents a latter day version of this Roman Empire beast, who will make war with the Lord Jesus Christ when he returns. Revelation 17:12–14

“And the ten horns which thou sawest are ten kings, which have received no kingdom as yet; but receive power as kings one hour with the beast. These have one mind, and shall give their power and strength unto the beast. These shall make war with the Lamb, and the Lamb shall overcome them: for he is Lord of lords, and King of kings: and they that are with him are called, and chosen, and faithful.”

In Revelation 17, nations (ten kings) are to give their power to a beast (latter day Roman Empire), who is controlled — ridden — by an unfaithful woman. Symbolically a woman represents a religious body, in a good sense a caste virgin to Christ — the ecclesia. Or an unfaithful religious body like Jezebel who turns others away from the truth.

Just as the pope compared the European nations to a body that could die, and had a direction or purpose, so Revelation 17 does also. Verse 8 says the beast was (existed in the past), and is not (has no political life), and shall ascend (will gain political life). The ten kings in verse 13, give their “power and strength to the beast” and so give it political life. The definitions of the words power and strength are extensive, but the parts of the definitions that apply to political power are significant. The word power is defined by Thayer’s as: “strength, ability, inherent power, power residing in a thing by virtue of its nature”, and, “power consisting in or resting upon armies”. The word strength in a political sense means, “The power of rule or government.” and, “the power of judicial decision”. So the kings of Europe are to give their inherent political power, their armies and the rule of government and judicial power to the beast controlled by the Vatican.

By coming together in the Vatican, to affirm their political unity and unity of purpose the nations of Europe are bringing the beast back into existence and are allowing it to be controlled by the unfaithful religious system — the Vatican. Revelation tells us that they have one mind. This is the same purpose and therefore they create a union. From Revelation we can see that the European Union will not disappear, but will become stronger and the pope will get his wish and will be able to direct the policies and direction of this political body.

Britain was not in attendance at this 60th European Union party as they are moving out of the European Union. We can expect that Britain’s exit from Europe may not be so amicable. Already the divorce is not moving in this direction. There is trouble over the future of Gibraltar. In the Telegraph view, the paper says, “Theresa May must be ready to walk away from the EU”. The opinion piece begins:

“The UK must be prepared to walk away from the Brexit negotiations without a deal. This week, Theresa May made a perfectly reasonable, even conciliatory, opening gambit to the EU. The EU has replied with insults and threats to the future of Gibraltar. If its goal is to tie us up in ridiculous distractions for two years, and even dictate the kind of economy that we will have after leaving, then Mrs May must make it clear that Britain would rather walk than talk.”

If it continues in this way it will force Britain to make trade alliances elsewhere — which is exactly what is happening. In The Telegraph business today, it is reported that:

“Philip Hammond and Mark Carney will lead a delegation of top policymakers to India this week to “bang the drum for British business” as the UK seeks to strengthen ties outside the EU.”

The European Union as an ideal, is more important to the top policy makers in Europe than how their economies will fare after Britain’s departure. Therefore it seems doubtful that the British divorce from the EU will be amicable. The EU has to prove to the nations that give this union life and existence, that it is worthwhile for them to give their power and strength to the beast.

It is amazing to see Britain coming out of Europe and in a way terrifying to see the nations of Europe seeking to come closer together. These are great events that herald the return of the Lord Jesus, which we pray would be near at hand. This has been David Billington with you for the Bible in the News. Come back next week to www.bibleinthenews.com

We are always keen to receive your feedback, you may leave comments in the comments area below or alternatively email us at [email protected] and we will get back to you with a reply as soon as we can.
[site_reviews_form title=”The EU Celebrates 60 Years” description=”Last Saturday a special EU summit in Rome, on one of the seven hills, commemorated 60 years since the Treaty of Rome, which established the European Economic Community that led to the European Union. The European Union’s remaining 27 leaders — without Britain — declared in a joint statement the EU to be “undivided and indivisible”. The prime minister of Great Britain, Theresa May, was absent from the gathered European leaders.” id=”j1bt5hb0″ hide=”email,terms”]