Russia’s Claim on Istanbul and the Hagia Sophia

Russia’s Claim on Istanbul and the Hagia Sophia
As the Christian world reacts to the reconversion of Hagia Sophia from a museum back into a mosque we wonder if this will be the event that ultimately provokes Russia to stake her claim on Constantinople?
Watch the video version here…

Print
July 19, 2020 – Audio, 12.67 MIN
(Links at bottom of page to download free viewers.)
This past week we have seen the world reacting to the reconversion of Hagia Sophia in Istanbul from a museum back into a mosque by decision on July 10th of Turkey’s President Erdogan. The so-called Christian world, especially in the east, has been riled by this move. Patriarch Kirill of Russia indicated it would cause deep pain to the Russian people. Pope Francis has also expressed his great sadness.

Istanbul, or Constantinople as it was known historically, was the new Rome of the east following the demise of the western Roman empire. It is considered to be the bridge between the eastern and western churches, that is the Catholic and Orthodox churches. 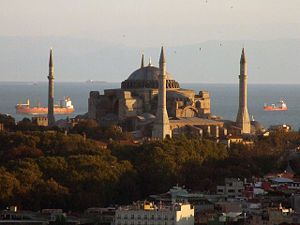 Hagia Sophia and the Bosphorus, Turkey

Hagia Sophia, or ‘Divine Wisdom’ in Greek, was completed in 537 by Byzantine emperor Justinian.

The vast, domed structure overlooked the Golden Horn harbour and entrance to the Bosphorus from the heart of Constantinople. It was the centre of Orthodox Christianity and remained the world’s largest church for centuries.

Hagia Sophia stayed under Byzantine control — except for a brief seizure by Crusaders in the 13th century — until the city was captured by the Muslim forces of the Ottoman Sultan, Mehmet the Conqueror, who converted it into a mosque… In 1934, Turkey’s first president, Mustafa Kemal Ataturk, forging a secular republic out of the defeated Ottoman Empire, converted Hagia Sophia into a museum… – CBC, July 11, 2020

Mosaics depicting Jesus, Mary and Christian saints, that had been considered idolatrous by the Muslims and had been plastered over, were uncovered through arduous restoration work for the museum. These mosaics stand as witness to the judgments that God brought by the Muslim forces, who were stirred up by the idolatrous practices of the Christians in the thirteenth century to come against them as described in the sixth trumpet of Revelation 9. Following the fall of Constantinople, or Byzantine as it was known, in 1453 the seat of power moved north to Moscow establishing what has been called the Third Rome under the control of the Czars.

France 24 interviewed reporter Nick Holdsworth in Moscow on the reaction to Erdogan’s decree on Hagia Sophia:

Q: Why such a strong reaction via Russia’s Orthodox Church?

This cathedral turned museum, now turned mosque, has always been at the very heart of Eastern Christianity. It’s revered as the site of the founding, if you like, of eastern Christianity in Constantinople. Istanbul was called back in those days, the end of the Roman Empire. And therefore, it holds a particular special place in the hearts of the Russian Orthodox community. The Patriarch Kirill spoke about this earlier this week in very, very strong terms. Saying that converting it to a mosque would be an attack on all of Christian civilization. It would cause deep pain to the Russian people, and he reminded the nation and the world that relations between Russia and Turkey are developing dynamically, he said. So, all of that is true. Relations between Russia and Turkey, sometimes strained, sometimes positive, are dynamic.

To the Eastern Church, this is at the very heart of their belief. This is where very early heads of the church were crowned. There’s enormous amount of history and tradition involved here. And this decision by Turkey comes just a week after Russians voted in a plebiscite for a new constitution, which specifically states that Russia is a Christian nation. That’s never been in a Russian constitution before, and it also cements the return to power of the Russian Orthodox Church after years out in the cold during the Soviet period and under President Putin in the last two decades, an increasingly close, almost symbiotic relationship with the Kremlin. So, for the Russian church and indeed for the Russian state, this is a big shock. There will almost certainly be some kind of vocal protests here in Russia as much as there has been celebration in Istanbul by some today.

Q: The Russian Orthodox Church has made no bones about its feeling on this move. Could there be consequences politically when it comes to Russian Turkish relations?

This almost certainly will put a lot of stress on relations between Moscow and Ankara. The Russians and the Turks have a very interesting relationship in many ways. The Turkish President Erdogan and Russian President Vladimir Putin mirror images that both built their careers on a very strong man image that both involved their respective religions closely in the state. In Russia, Christianity, in Turkey, Islam. They’re very similar.

They work together quite well at times. They’ve been working quite closely together, trying to get cease fires, trying to forge a peace plan in Syria. But there have been some very difficult moments. Just over four years ago, the Turks shot down a Russian fighter jet over the Turkish Syrian border and Vladimir Putin, the Russian president, turned around and canceled all flights of Russians and Turks between the two countries. More recently, they have been making progress in Syria. Erdogan and Putin negotiated a cease fire and a safe passage corridor around Idlib in March. So, the relations are difficult, but they are in many ways constructive. This decision, which seems to have been taken in Turkey to shore up President Erdogan’s position there, will certainly put stress and strain on diplomatic relations between Russia and Turkey and we may see some kind of response. There’s been no response yet from the Kremlin, but we may see something. Early this week, Russian MPs were appealing to their Turkish counterparts to stop this move in Istanbul. So, there will be ramifications.” – France 24, July 10, 2020

We should note here the connection made with Putin’s new constitution which states “Russia is a Christian nation”. This is a major and significant change that has occurred since the fall of atheistic communism in Russia. Looking forward prophetically, we are given to expect a union between Europe, Russia and the two factions of the church, the Roman Catholic in the west and the Eastern Orthodox in the east prior to Armageddon. This is depicted by the eastern dragon, western beast and false prophet of the sixth vial of Revelation which John saw,three unclean spirits like frogs come out of the mouth of the dragon, and out of the mouth of the beast, and out of the mouth of the false prophet. For they are the spirits of demons, working miracles, which go forth unto the kings of the earth and of the whole world, to gather them to the battle of that great day of God Almighty. – Ch. 16:13-14

The Christadelphian commentator John Thomas wrote extensively on this subject including in the book, The Exposition of Daniel. He also relates these events to Daniel chapters 8 and 11:

The prophecy concerning ‘the King’ in the eighth chapter is evidently descriptive of the Latino-Greek power in its pagan constitution, known in history as the destroyer of Jerusalem, and Judah ‘the people of the holy ones’; but with a hint also of its future ecclesiastical peculiarity, as appears from the testimony that ‘through his policy he shall cause falsehood to prosper by his power’. These few words are descriptive of the character or nature of the power since Constantine the Great set up its throne in Constantinople to the present hour; and will be so pre-eminently, when its administration shall pass from the Sultan to the Autocrat of all the Russias. As the head of a confederacy of the adherents of the Greek and Latin churches, it will be his policy to cause their priesthoods to be respected as useful co-operators in the subjection of Europe to his will.

This ecclesiastical policy of the Constantinopolitan Autocracy is enlarged upon in the description of it set forth in the eleventh chapter, where it is more particularly regarded in its catholic constitution without taking into the account the division of the Babylonian superstition into Greek and Latin catholic churches. Whatever may be the individual prejudices existing between individuals of the two schisms matters not; their ecclesiastics, whose spiritual authority is death-stricken by infidelity, on the principle of self-preservation will have to place themselves under the shadow of the Autocrat, as Greeks and Latins have already done in the present dominions of the Czar” –  Page 57

Therefore, it was with great excitement we heard John Paul II, the pope who worked with Ronald Reagan to orchestrate the fall of communism in Poland, say ‘the Church must breathe with her two lungs’ (Ut Unim Sint, 54), by which he meant the Western and Eastern halves of the Church. Ecumenical cooperation between the pope and the patriarch of the Russian church has continued since that time.

What reaction there may be to Erodogan’s move with Hagia Sophia remains to be seen, but ultimately Turkey, as a remnant of the Ottoman power of the Euphrates will continue to dry up, and cooperation, willing or otherwise, between Russia, Europe and the eastern and western churches will bring about the picture that Bible prophecy requires. A move by Russia into Istanbul, asserting the claims of the false prophet over her holy places, would not be a surprise if we are still here to see it. Russia will then be firmly positioned as the King of the North, in preparation to invade “the glorious land”. We pray the Lord Jesus Christ will soon come “whose right it is” to reign over all the earth as King of Kings, for at that time the King of the North, having failed to take Jerusalem, “shall come to his end, and none shall help him” (Dan. 11:39-45).

This has been Daniel Billington with you this week. We invite you to check out our web site at www.bibleinthenews.com and to return for another edition of the Bible in the News next week.