Russia Prepares its Allies(inc Ethiopia) that will Join it in the Ezekiel 38 Invasion.

Ethiopia With Them
Russia Prepares its Allies that will Join it in the Ezekiel 38 Invasion.

Print
January 13, 2019 – Audio, 12.00 MIN
(Links at bottom of page to download free viewers.)
Russia is arming, training and preparing the nations which answer to the ancient Cush in preparation for the grand invasion. This past week saw evidence of a move to put Russian ships in the ports of Sudan, and train equip some of these African Nations.

The scripture clearly indicates the nations that will be allied with Russia, the King of the North, when it invades the Middle East at the time of the end:

“And at the time of the end shall the king of the south push at him: and the king of the north shall come against him like a whirlwind, with chariots, and with horsemen, and with many ships; and he shall enter into the countries, and shall overflow and pass over. He shall enter also into the glorious land, and many countries shall be overthrown: but these shall escape out of his hand, even Edom, and Moab, and the chief of the children of Ammon. He shall stretch forth his hand also upon the countries: and the land of Egypt shall not escape. But he shall have power over the treasures of gold and of silver, and over all the precious things of Egypt: and the Libyans and the Ethiopians shall be at his steps.” (Daniel 11:40–43)

We see depicted a militarized host including African nations such as Libya and Ethiopia. Ethiopia is the biblical Kush, an area that includes modern Sudan and Ethiopia (according to the Theological Wordbook of the Old Testament) and Nubia which extended into what we today call the Central African Republic. In the latter days they are part of a military force that is mounted (horses), mechanized (chariots) and also has ships.

“And I will turn thee back, and put hooks into thy jaws, and I will bring thee forth, and all thine army, horses and horsemen, all of them clothed with all sorts of armour, even a great company with bucklers and shields, all of them handling swords: Persia, Ethiopia, and Libya with them; all of them with shield and helmet: Gomer, and all his bands; the house of Togarmah of the north quarters, and all his bands: and many people with thee. Be thou prepared, and prepare for thyself, thou, and all thy company that are assembled unto thee, and be thou a guard unto them.” (Ezekiel 38:4–7)

Again, this is a militarized host, that has been armed with all sorts of armour and includes the Persians, Ethiopians and Libyans. A preparation has taken place, both of Rosh and also of her company. The word prepared means to “make ready” or to “bring something into being,” to make provision for, train, put in order. They are found “handling” swords, the qal form of the word meaning “to lay hold on and wield skillfully”. This requires both being armed and trained.

Russia Arming and Training the Cush

What was interesting is the increase in Russian military activity in the area of Cush. Back in November, following Lavrov’s tour of Africa, the following was reported in the Zimbabwe Herald:

Russia has a notable military influence in Africa, both in terms of boots on the ground and military transactions with states. Russia is the second-largest exporter of arms globally and a major supplier to Africa. Despite the controversy and moral issues around this (Russian weapons are often the ones showing up in countries under arms embargoes), it is likely to remain one of its comparative advantages. Many African countries attend the “military games” hosted by Russia, either to participate or observe. Russia provides large numbers of troops to UN peacekeeping missions. In fact, Russian peacekeepers in Africa outnumber those from France, the UK and the US combined. 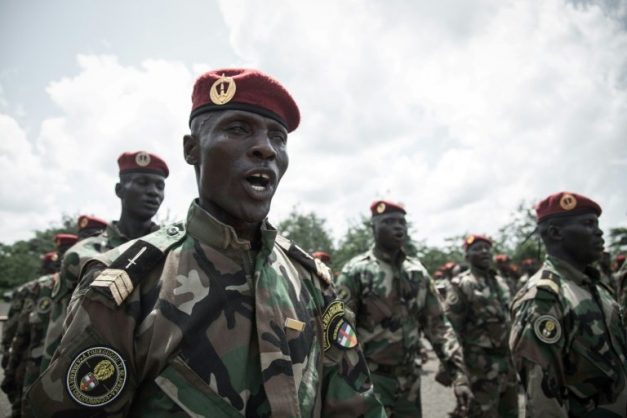 This was elaborated on this week in an article in the African publication Citizen, where it ran an article entitled, “Central Africa Army Head came to Russia for Training”. The article stated:

“As of this month, 1,300 of our army’s soldiers have been instructed and trained” at a Russian facility in CAR, minister Marie Noelle Koyara told Russia’s RIA Novosti news agency.

“Our head of the general staff has himself been for training in Russia,” she added, without providing further details.

What is fascinating about this, is the words of Ezekiel, “Be thou prepared, and prepare for thyself, thou, and all thy company that are assembled unto thee.”  Russia is preparing the company of Cushites by sending its military “trainers” to Africa, and some of the African Military leaders to Russia for training. The training is effective as the publication reports:

Since Russia-trained soldiers have been deployed in the country, “the situation has not only stabilised, but visibly improved,” she said.

The defence minister said that at the Russian centre at the former presidential palace in Berengo west of Bangui which opened last year, soldiers were instructed in how “to become a real military force”.

The arming of the African Continent has caused some consternation. It was reported in the BBC’s publication Reality Check on the 9th of January, under the headline “Russia in Africa: Is it becoming a key player?”

Today, Russia “seeks to restore and strengthen its position on the African continent”, according to Inna Andronova, from Moscow’s Higher School of Economics.

One way is through arms exports.

Although some of its main markets are in Asia, sales to Africa are significant, and growing.

Its biggest customer in the continent is Algeria, according to data supplied by the Stockholm International Peace Research Institute (SIPRI).

But SIPRI data on major weapons transfers also shows that in 2016-17, Russia received orders from or made deliveries to a range of other African countries:

These included transport and combat helicopters, combat aircraft and surface-to-air missile systems, in many cases second-hand equipment which has been modernised.

Russian military equipment is relatively cheap compared with Western suppliers, and still fairly robust and reliable, which can make it attractive for poorer nations.

This same idea was picked up by the publication which stated:

Military Base in Sudan

This week also saw further news about the construction of military base in Sudan. The Sudan Tribune reported on Saturday:

The Prime Minister of Russia, Dmitry Medvedev has approved a draft agreement with Sudan on facilitating the entry of warships to the ports of the two countries.

In an interview with Sputnik News Service, head of the parliamentary subcommittee on Defence, Security and Public Order, Al-Hadi Adam Musa, described the draft agreement between the two sides to facilitate entry of Russian and Sudanese warships to the ports of the two nations as a step forward towards establishing strategic relations.

While in Russia in November 2017, al-Bashir offered to construct an airbase for Russia on the Red Sea coast and to re-equip the Sudanese army with the Russian weapons including SU-30 fighter jets and surface-to-air missiles.

We find this move is fascinating as it would see the introduction of Russian warships into the Red sea. Remember Daniel’s description of the invasion that would involve Cush:

“…the king of the north shall come against him like a whirlwind, with chariots, and with horsemen, and with many ships; and he shall enter into the countries, and shall overflow and pass over.” (Daniel 11:40)

The invasion involves many ships. The area of Cush is moving to become a host of the ships that will eventually be involved in the invasion.

Zimbabwe’s Herald news service ran an article under the title “The return of Russia to Africa” back in November, where it reported:

The relationship between Russia and Sudan is by no means new. For decades, there were economic, political and military relations between the two countries. Russia, as a permanent member of the UN Security Council, along with China, opposed initiatives to send peacekeeping missions to Darfur, although Sudan itself accepted the peacekeeping mission through the Comprehensive Peace Agreement in 2005. In addition, Russia has been a major arms supplier for a considerable time. President al-Bashir recently announced that Sudan and Russia had agreed on a programme to boost Sudan’s military capabilities.

The plan aimed to enable the Sudanese military to counter any threat. Russia would develop the Sudanese armed forces in a way that would deter any aggressor. Sudan’s air force is comprised mainly of Russian warplanes, and the bulk of its military equipment has also been traditionally supplied by Russia. 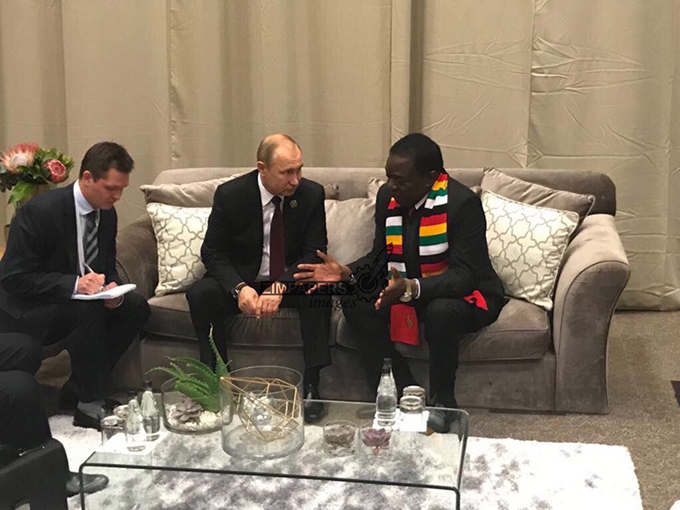 The motives for these moves are both military and economic. The Pindula News, a Zimbabwe news service, ran a headline today, “Mnangagwa’s Russia Visit Expected To Revive US$3 Billion Darwendale Platinum Project.” The article stated:

President Emmerson Mnangagwa (of Zimbabwe)  is expected to visit Russia and three other Former Soviet Socialist Republics (FSSRs) this week. The visit to Russia is expected to unlock US$3 billion for the Darwendale platinum project.

Although Zimbabwe is not part of the Cush, it pulls back the carpet on some of the reason for Russia’s interest in Africa – natural resources. The same Zimbabwe Herald mentioned earlier observed:

Africa’s resources in the field of energy, minerals and raw materials can supplement the needs of Russia in this regard. Russian companies have been implementing a number of interesting projects in African countries.

From a mining perspective, it is cooperating with Zimbabwe (where Russia is developing one of the world’s largest deposits of platinum group metals). It seems that Russia is actively re-establishing links with Angola. Firstly, Alrosa, the Russian giant, mines diamonds in that country. Secondly, there are talks with Angola over hydrocarbon production; it is one of the largest oil-producing countries in Africa and a member of OPEC.

The motives are both military and economic, looking to control more of the world’s oil production and distribution. This completely makes sense as it is why it is so interested in Africa. Russia’s economy is built on oil, and the more of the oil market it controls the higher the price of oil will be.

As we watch the development of Russia in preparing, arming and training it Cushite allies to wield the sword, we are encouraged to prepare ourselves for the Lord’s immanent return.

For the Bible in the News this has been Jonathan Bowen joining you.

The readings for today, September 24 are: 1 Chronicles 7
Ezekiel 20
Luke 17
Our website uses cookies from third party services to improve your browsing experience. Read more about this and how you can control cookies by clicking "Privacy Preferences".
X
X