For more audio like this and to visit the back catalogue visit http://www.bibleinthenews.com/Podcasts
Russia and Iran Fulfilling Bible Prophecy
The Middle East has become “the platform for Russia’s ambitions as a 21st-century great power”!

Print
August 28, 2016 – Audio, 9.14 MIN
(Links at bottom of page to download free viewers.)
This week Iranian vessels harass a US aircraft carrier in the Persian Gulf. The White House responded by stating that the, “Iranian provocation at sea was ‘not acceptable’”. The Reuters news report on YNET News said that, “After two incidents of Iranian naval provocation, the US issues a statement saying that Iran’s actions are ‘not clear,’ but that they nevertheless ‘have the potential to unnecessarily escalate tensions.’” 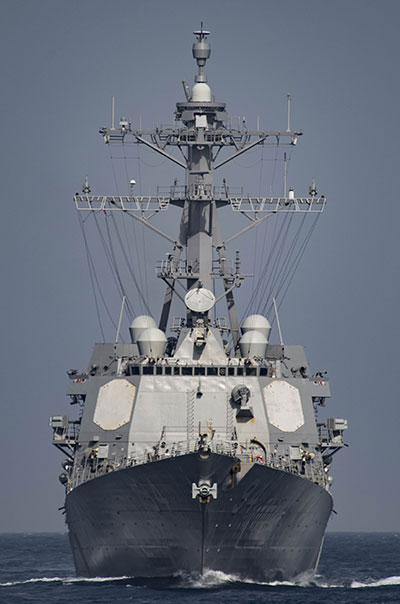 USS Nitze was harassed in the Persian Gulf by Iranian vessels.

These aggressive Iranian actions in the Persian Gulf this week, are very similar to harassment by Russian warplanes and ships to American vessels in the Black Sea. In April of this year the CNN reported: “Russian jets keep buzzing U.S. ships and planes. What can the U.S. do?” Two Russian fighter jets recently flew within 30 feet of the USS Cook which was sailing on the waters of the Black Sea. The CNN Article began: “Two separate close encounters between the Russian and U.S. militaries in recent days have left many wondering if future incidents could result in an armed clash.”

Russia and Iran both using similar tactics to harass American warships in international waters certainly shows that Russia and Iran are on one side and America on the other — despite all the diplomatic work the Obama administration has done to try and normalize relations with the Iranians.  Russia and Iran both have an interest in weakening American power and influence and in these cases appear to be actively seeking to humiliate them before the world and gain prestige for their own militaries.

The Economist on August 24 in an article entitled: “The war in Syria, Smoke and chaos”, discussed how “The battlefield in Syria grows more complicated.”. The last paragraph of the article had a very interesting comment on Russia and the Middle East.

“Russia, meanwhile, is establishing a more durable presence in the region, by making its air base in Latakia permanent and working closely with Iran. The Middle East has become “the platform for Russia’s ambitions as a 21st-century great power”, says Dmitri Trenin, the director of the Carnegie Moscow Centre, a think-tank. But it risks getting bogged down in Syria’s intractable and expanding war. Permanence, in that case, may not be desirable.”

Russia then; is becoming more entrenched in Syria; has made its airbase in the country  permanent; is working closely with Iran, and; the Middle East has become the platform for Russia’s ambitions!

The Russian, Syrian, Iranian axis is really an amazing fulfillment of Bible Prophecy! In 1977 in the Milestones booklet — a review of world events in relation to Bible Prophecy — Graham Pearce considered the alignment of Iran who was then in the American/Western sphere of influence. He wrote on page 42:

“Persia has received vast military and economic aid from the U.S. in the past ten years; she has a finely equipped army of 300,000 men, an airforce with the latest U.S. planes, and the largest navy in the Persian Gulf. How Persia will come into the Russian orbit we do not know. Persia’s relations with the Soviet are correct but not friendly. Persia has some Soviet planes, and several industrial undertakings associated with the Soviet, notably the 700 mile long gas line that carries natural gas from the Persian oilfield into southern Russia.”

How things have changed since 1977! Now we see Russia and Iran working together to harass the United States. Graham Pearce based his statement regarding Iran or Persia as it was then known moving into the Russian orbit on Ezekiel 38 verses 5 and 7 where the prophet says:

“Persia, Ethiopia and Libya with them…all thy company that are assembled unto thee, and be thou a guard to them”

This certainly gives a lot of merit to Graham’s interpretation of Ezekiel 38. The following are some more reasons why we can be sure that Ezekiel 38 is a prophecy for our time and why we can expect Iran to continue to remain in the Russian sphere of influence.

1. Ezekiel 38 is in a series of chapters, which contain prophecies of Israel’s restoration. These result in:  a new everlasting covenant being made with Israel; the areas surrounding God’s mountain being a blessing; the children of Israel living safely in the land of Israel, no longer being a prey to the nations; the nation being cleansed from all their uncleanness and God putting his spirit within them — pouring out his spirit on the whole house of Israel; God being Israel’s God and they being his people; the nations knowing God is sanctifying Israel; God’s sanctuary being in the midst of Israel forevermore; the LORD God magnifying and sanctifying himself and being known in the eyes of many nations, and no longer hiding his face from Israel. (Ezekiel 34:25-31; 36:25-29,33; 37:13-14, 26-28; 38:23; 39:27-29) From these passages, it is clear that these prophecies have to do with Israel’s final restoration and not the restoration that took place under the Persian Empire at the time of Ezra and Nehemiah.

2. After these prophecies of Israel’s final restoration, Ezekiel presents a glorious picture of the magnificent future “house of prayer for all people” — Ezekiel 40-48. At that time water flows from the sanctuary and cleanses the main body of the Dead Sea. Ezekiel 47:1-12

5. The group of nations led by Russia or Rosh and including Iran or Persia, that invade the land of Israel in Ezekiel 38 and are defeated by the God of Israel, are known in recent history for antisemitism and anti-Israel sentiment. Iran has threatened to “wipe Israel off the map” and has waged a proxy war against Israel through Hezbollah.

6. Ezekiel 38 contains a second group of nations which question Russia’s invasion of the mountains of Israel. This includes Sheba and Dedan (identified as Saudi Arabia and the Gulf States); and the trading nations of Tarshish (identified as Great Britain and the English speaking nations that come from her). This includes the United States whose vessels Russia and the Iranians are harassing.

The change that has taken place since the 70’s, when Persia was firmly in the the Western sphere of influence, until today where Iran is entrenched in a Russian axis, is an amazing sign of the times and a fulfillment of Bible prophecy. The world stage continues to be set for the fulfillment of Ezekiel 38 as we see it recognized that, ‘The Middle East has become “the platform for Russia’s ambitions as a 21st-century great power”’!

We live in amazing times. The times of Israel’s final restoration, the restoration again of the kingdom to Israel and the return of the Lord Jesus Christ to the earth. See Acts 1:3,6; 2:30; 3:20,21.

Come back again next week God willing as we continue to watch the signs of the times at www.bibleinthenews.com. This has been David Billington with you.