Part 28: CREATION – A CLOSER LOOK AT GENESIS –And on the seventh day God ended his work– Don Pearce

And God blessed the seventh day, and sanctified it: because that in it he had rested from all his work which God created and made.2:2-3

It needed this a Day the seventh for the work to be finished, completed. God intended man to have a seven day week. He had provided the tools on Day fourth for man to have an ordered life, and later to bring their offerings at the appointed times. The Sabbath day was intended to be one that man used to meditate upon the things of God. For Adam and Eve that first Sabbath would be a period of instruction and enlightenment by the angelic representative of Yahweh Elohim, who could have been Michael, one of the chief of the angels. Dan. 10:13 God intention was that man worked for 6 days and how pleasant that work of tending and guarding the garden (2:15) would ha been before the Fall, but the 7th was intended to be given in God’s service.

If thou turn away thy foot from the sabbath, from doing thy pleasure on my holy day; and call the sabbath a delight, the holy of the LORD, honourable; and shalt honour him, not doing thine own ways, nor finding thine own pleasure, nor speaking thine own words: Isa. 58:13

Then would flow God’s blessings.

Now God is the author of all natural laws. It is one of those laws of mathematics which illustrate why God chose 7 days instead of 6 or 8. If one takes 7 objects all the same size – they can be coins or plates or whatever. Put one in the middle and place the other six around it. You will find that they just fit togther, each touching its neighbour on either side and all touching the central one and forming another circle. That’s why the number 7 is associated with completeness, a circle has no beginning nor ending. 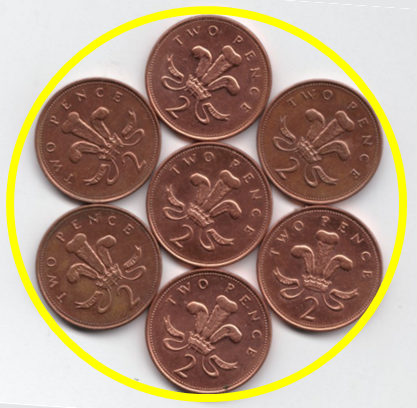 How privileged we are to understand these majestic things our God did at the beginning. We can have confidence in His Word.

There are many aspects we have not covered; perhaps these can form later articles, where we examine the folly and the flaws in the evolutionary teaching which is almost universal today. There are many excellent websites that uphold the Genesis account of creation and refute evolution. (creation.com;   This article is based upon talks given over many years, but I have found useful a new book entitled The Genesis Account by Jonathan Sarfati, published 2015. As always one reads with discernment where speaks of the Trinity and Jesus the Creator.