Next Year in Jerusalem! – L’Shana Haba’ah B’Yerushalayim The Passover explained Print
April 28, 2019 – Audio, 10.52 MIN
(Links at bottom of page to download free viewers.)
Shalom – This is Matt Davies joining you for the Passover edition of the Bible in the News.

The evening of Saturday, 27th of April marks the end of the Jewish celebration of the Passover (Pesach).

Passover is a feast which begins on the fifteenth day of the Hebrew month of Nisan – this year that was on Friday 19th April in the Gentile calendar.

Passover celebrates the deliverance of the Jewish people from slavery in Egypt.

In the Bible, in the book of Exodus, we read how God led the people out of bondage in Egypt towards the promised land through the leadership of Moses. We read that ten plagues were inflicted upon the Egyptians before the Pharaoh finally agreed to release the Israelite slaves. The final and the tenth plague was the death of the Egyptian first-born inflicted by God through his angel.

The angel was to pass through the land of Egypt and kill the firstborn of every family. However, the Jewish people were instructed to kill a lamb and to use its blood to mark the doorposts of their homes. Upon seeing this, the angel of God would ‘pass over ‘the first-born in these homes – which is why the event is called the “Passover”.

Why is it still celebrated? 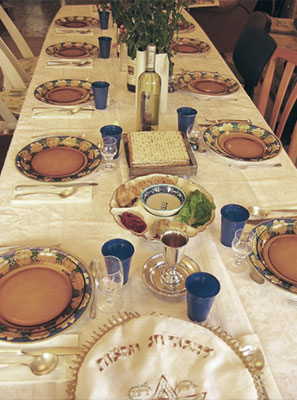 On that great day we read that Moses commanded the people to “Remember this day, in which ye came out from Egypt, out of the house of bondage; for by strength of hand the LORD brought you out from this place… And thou shalt shew thy son in that day, saying, This is done because of that which the LORD did unto me when I came forth out of Egypt. And it shall be for a sign unto thee upon thine hand, and for a memorial between thine eyes, that the Lord’s law may be in thy mouth: for with a  strong hand hath the LORD brought thee out of Egypt. Thou shalt therefore keep this ordinance in his season from year to year.” Exodus 13:3-9.

We later read in Deuteronomy of the reason the people were to keep the Passover “that thou mayest remember the day when thou camest forth out of the land of Egypt all the days of thy life.” Deuteronomy 16:3.

What is remarkable is that the historical event of the Passover took place around 1300BC. That is over 3300 years ago – and it is still being remembered. The fact this feast has been kept by the Jews is a witness to the God of the Bible and the mighty acts he wrought through and for his people Israel. As we read in Isaiah “I have declared, and have saved, and I have shewed.. therefore ye are my witnesses, saith the LORD, that I am God.”

So the Jewish people still mark the Passover today as a national and religious holiday. This is an amazing piece of evidence to the truth of the Bible –  as it is a powerful link to the past. Why else would thousands of people spanning hundreds of generations mark such an occasion such as the Passover? 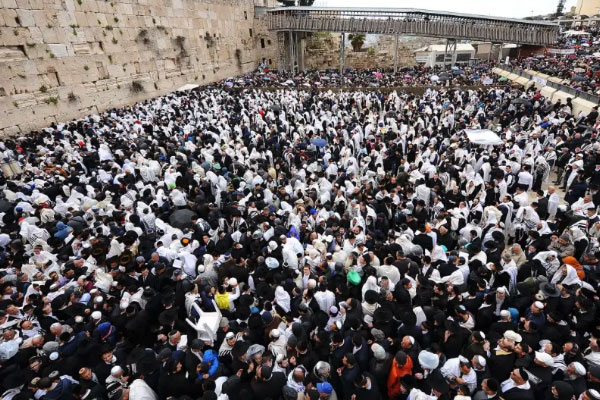 In Jerusalem, according to the Jerusalem Post, there have been a record number of Jews who have visited the Western wall during the feast – an average of 100,000 per day. In ancient Hebron, where the ancient burial places of the Jewish Forefathers of Abraham, Isaac and Jacob are, 25,000 Jews attended a Passover celebration on Monday – this is despite 80% of Hebron being under Palestinian Authority Jurisdiction with only 20% being under Israeli control.

However, as there is currently no tabernacle or temple, although the Jews remember the Passover feast they cannot completely keep it. The reason for this is that it requires the sacrifice of the lamb, slain “in the place which the LORD shall choose to place his name there.” (Deuteronomy 16:2).

Since the fall of Jerusalem in AD70 when the Jewish temple was destroyed and the Jewish people scattered, the Passover has not been fully observed. It cannot be – because there is no place for the sacrifice of lambs to be done.

However the Jews keep it in the hope that someday the temple will be rebuilt, the Messiah will come and they will be able to keep it once again. They mark this by the saying “Next year in Jerusalem”. This phrase is often sung and prayed for at the end of the Passover feast (called Seder) by Jews.

Why is it important?

It is interesting to consider what God was teaching all those who wish to follow and believe in Him through this ritual meal of the Passover.

The Passover lamb had to be without defect. We read of this in Exodus 12:5: “Your lamb shall be without blemish, a male of the first year …”. Therefore Israel was being taught that one who had a perfect character would come as a sacrifice that would save them.

We see such a one in the Lord Jesus Christ. For although he was a man, a partaker of the same “flesh and blood” as other men (Heb 2:14), he “did no sin, neither was guile found in his mouth” (1 Peter 2:22). By bearing the same nature as us and being “in all points tempted like as we are, yet without sin.”  (Hebrews 4:15 see also 9:28, Romans 8:3 and 2 Cor 5:21) the Lord Jesus Christ was indeed an unblemished lamb who overcame the temptations of sin to fulfil perfectly the will of his Father and who voluntarily laid down his life as a sacrifice for sin.

We read in John how Jesus is called “the Lamb of God, which taketh away the sin of the world.” John 1:29

He died in obedience to God on the cross as a sacrifice. “For even Christ, our Passover is sacrificed for us:” 1 Corinthians 5:7. This was done to declare God’s righteousness. That a man who had not transgressed God’s law was still worthy of death because of the mortal, sin-cursed, nature he bore (Romans 3:25-26, Hebrews 2:14). A declaration that even without transgressing this natural state of man is worthy of death because from this state comes the impulses to sin (James 1:14, Mark 7:21).

The Bible speaks about having faith in the sacrifice of Christ as being the basis of God’s salvation – through God’s love, mercy and forbearance He is willing to forgive sin and change the very nature we bear from mortality into immortality because of a faith in His righteousness declared in the sacrifice and resurrection of His son, the Lord Jesus Christ (Phil 3:21).

“Forasmuch as ye know that ye were not redeemed with corruptible things, as silver and gold, from your vain conversation received by tradition from your fathers; But with the precious blood of Christ, as of a lamb without blemish and without spot:”   1Peter 1:18-19

The offer of this redemption is extended in the Bible to all those who believe the gospel of the salvation in Christ and in the coming hope of the kingdom of God soon to be established on the earth by him.

Ultimately the events of the Passover foreshadowed this great work of salvation. The opportunity of the angel fo death to “Passover” all those who have associated themselves with the lamb through baptism into Christ.

So as the Jewish feast of the Passover draws to an end we remember God’s mighty works. The salvation of his people of Israel from Egypt and the teaching of the greater salvation from sin and death we see in the lamb. That lamb which points to the work of Jesus Christ. And like those celebrating the ritual of Passover we too pray that “Next year in Jerusalem” the Messiah will have returned, the temple rebuilt and for God’s Kingdom to be restored again to Israel. Russia Prepares its Allies(inc Ethiopia) that will Join it in the Ezekiel 38 Invasion.

Ethiopia With Them Russia Prepares its Allies that will Join it in the Ezekiel 38 Invasion. Listen in MP3 Format  …

ENDTIME PROPHECY: Wake up the Mighty Men of WAR! Bible in the News Video Post

Wake up the Might Men of War! A resurgent Russia is seen across the world, heralding the return of Christ… Prophesied by Daniel, the King of the North invades the Middle East to occupy Egypt. As Russia takes on the… For more audio like this and to visit the back catalogue visit http://www.bibleinthenews.com/Podcasts The EU Celebrates 60 Years Will Britain… The Angels are working, and their fingerprints are everywhere … All that needs to happen before the resurrection has happened…. The purpose of prophecy is established. The history of Rome, particularly relating the Middle East is outlined. Rome destroyed Jerusalem… The Liberation Of Jerusalem & Its Biblical Significance 3 Video Bible Study Video Description: 3 x Signs of the times studies given at royal oak ecclesia in early 2018, Frank Abel in these…