LOOK!! – 2017 will be a PROPHETICAL year to remember! – Video Post Bible in the News

Events are shaping up to make 2017 a prophetical year to remember! From the standpoint of Bible Prophecy the centre of everything is Israel and its capital Jerusalem and certainly today that locality is the eye of the storm as far as world events are concerned.


The Restoration and Controversy of Judah and Jerusalem
The Regulation Law, Amona and the West Bank

Print
December 11, 2016 – Audio, 8.13 MIN
(Links at bottom of page to download free viewers.)
Events are shaping up to make 2017 a prophetical year to remember! From the standpoint of Bible Prophecy the centre of everything is Israel and its capital Jerusalem and certainly today that locality is the eye of the storm as far as world events are concerned.

In the area known today as the West Bank, or more correctly Judea and Samaria, there is a small peaceful Jewish village of caravan homes on a hilltop called Amona. Amona was established in the mid-1990’s with Israeli government built infrastructure. However, during 2006 when 9 new homes were almost completed and ready to move into by Jewish families, a radical left wing pro-Palestinian Arab organization called Yesh Din, petitioned the courts that the homes were built on private Palestinian Arab land. The courts ruled in their favour and this led to then Prime Minister Ehud Olmert’s request for them to be demolished. The demolitions took place in the face of large protests and many Jewish youths were wounded by police brutality. This event remains highly controversial in Israel to this day. Just over a year and a half ago, I was able to visit Amona and see the foundations of the razed homes. Nothing has been done with the land where they stood. The remains of the homes are a desolate waste on the edge of the community – a monument to human stupidity. Nevertheless, visiting the site brought home the enormous controversy that surrounds Jews being able to live in their Biblical heartland – Judea and Samaria. 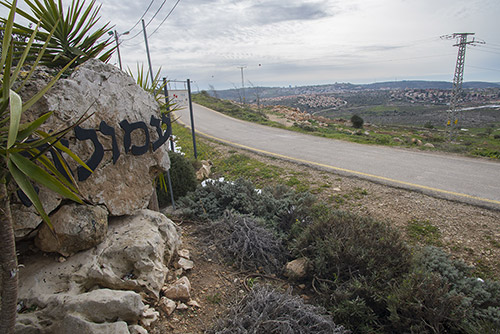 The sign marking the entrance to the Jewish community of Amona.

In the last couple of years another radical left wing organization called “Peace Now” has petitioned the courts for the complete removal of Amona. Peace Now itself is controversial as it is largely funded by foreign governments in the European Union. Again the court has ruled in favour of the left wing organization. (Israel’s supreme court itself is also controversial, as many see it as having a very strong left wing bias.)

According to the law, the Netanyahu, Likud government, must carry out the demolition; but the government has been eager to avoid a confrontation. The 2006 demolition at Amona, confrontation and violence, could be seen as leading to the demise of the then Olmert led government. Today, it is reported that the government will ask the Supreme Court for a one month delay in the demolition order, as there is no where to move the evacuated families. A one month delay would move the demolition into the time when Donald Trump would be in the Whitehouse instead of Obama, which may give the Israeli government a diplomatic reprieve of some international pressure in regards to the settlements.

The difficulty of dealing with Palestinian Arab claims to land that has been built upon by Jews, has led the government to put forward a new law called the “Regulation Law”. The law would provide a way out for those Jewish communities that have been built on land decades ago, which then are subjected to Palestinian Arab claims that many feel are completely fraudulent. The proposed Regulation law would not help communities where there is already an ongoing court case, such as Amona, but it would settle many others. The Regulation Law is garnering significant international attention, with condemnations from the EU, the US State Department and others, claiming that the law is contrary to international law. By some it is seen as a step towards Israeli annexation of the portion of the West Bank which is fully under their control. If these court cases continue and if Israel faces a problem with international law, it could force Israel to annex some of the territory in the area known as the West Bank.

The foundation of a destroyed home in the Jewish settlement of Amona.

This once again demonstrates the absurdity of 40 caravan homes garnering the attention of the EU, the UN, the US State Department and many others. Judea and Samaria certainly are the eye of the storm!

This is a fulfillment of the prophecy of Joel chapter 3, verse 1 and 2.

“For, behold, in those days, and in that time, when I shall bring again the captivity of Judah and Jerusalem, I will also gather all nations, and will bring them down into the valley of Jehoshaphat, and will plead with them there for my people and for my heritage Israel, whom they have scattered among the nations, and parted my land.”

Joel prophesied that in the days when God would restore Judah and Jerusalem to his people, there would be a great controversy among the nations which would bring them down into that land where God would judge them in regards to his people and heritage of Israel whom they had previously dispersed among the nations and partitioned the land of Israel. Today we certainly live in a time of great controversy concerning Judah and Jerusalem!

Other events in the world also seem to be building up to a major change in Israel, one that could very well have to do with the West Bank area and Jerusalem.

First, the new American Administration seems set to have a much more “pro-Israel” outlook compared to the outgoing Obama administration. If these words translate into actions when the new administration comes to power, it will open the door to the possibility of great changes taking place in Israel and the Middle East.

Secondly, the war in Syria has moved in favour of the Assad regime and its backers, including Russia, Iran and Hezbollah. Russia is now firmly implanted in Syria, which is changing the dynamic of the whole region. This is a rapidly developing situation, which will also be affected by the new American administration.

Thirdly, Turkey continues to be under threat from terrorism, political instability and waves of refugees. At any point Russia could exploit the situation in a move to regain control of the Bosphorus and Constantinople.

Fourthly, the most anti-Israel block, especially towards the West Bank Jewish settlements is the European Union. The EU is in state of crisis which could get worse at any minute, with threats of terrorism, monetary collapse and the UK in the process of working towards leaving due to the Brexit decision. If the EU is too busy with internal crises, it could create a moment where Israel could annex some of the West Bank areas with a more manageable amount of international fallout.

As has been mentioned on Bible in the News 2017 marks 50 years of the reunification of Jerusalem and 100 years since the liberation of Jerusalem from the Turks and the issuing of the Balfour Declaration, viewing with favour the establishment of a national home for the Jewish people. It is very exciting as we see events leading towards a prophetically momentous 2017!

Thanks for taking the time to listen or read Bible in the News, this has been David Billington with you. Come back next week God willing to www.bibleinthenews.com

The readings for today, November 26 are: Esther 1
Amos 6
2 Timothy 3
2 Timothy 4
Our website uses cookies from third party services to improve your browsing experience. Read more about this and how you can control cookies by clicking "Privacy Preferences".
X
X