Rumblings in the North

Print
February 15, 2018 – Audio, 9.54 MIN
(Links at bottom of page to download free viewers.)
Iran has used the vacuum of the Syrian civil war to create a foothold in Syria which has caused great alarm in Israel. This week we look at recent developments with Bible in hand as we see rumblings in the North. Welcome to Bible in the News. This is Matt Davies joining you.

Last Saturday an Iranian drone was destroyed by Israelis after it entered Israeli airspace. It had taken off from Syria. In repose Israel launched eight jets to strike at the drones launch site. As they were conducting the strike in Syrian territory Syrian antiaircraft missiles were fired on the jets and one was hit, causing the pilot to eject and the plane to crash.
According to the Guardian newspaper in their report entitled “Israel launches ‘large-scale’ attack in Syria after fighter jet crashes”, Israel destroyed four Iranian targets near Damascus.

Watch drone being shot down – source:IDF 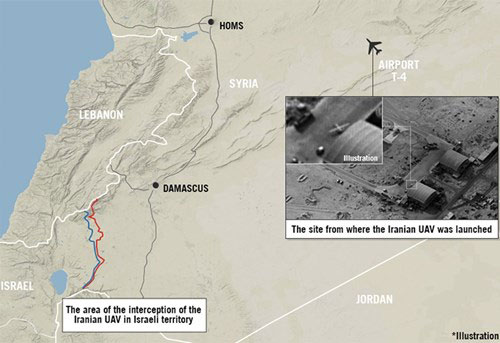 On Wednesday 14th February, Israeli Defence Minister Avigdor Liberman gave a speech in TelAviv. In an article entitled “Iran Declared War on us Long Ago” by the Jerusalem Post he was reported to of said:

“Iran declared war on us. The highest echelons in Tehran want to erase the Zionist entity; they do not hide the fact that they want to wipe the State of Israel off the face of the earth,… Iran is also fighting us through its proxies – Hezbollah, Islamic Jihad and now Hamas, and of course the Syrian regime. Therefore, it is a daily war not only in the military aspect but also in the realm of international terrorism, and we do everything in order to preserve Israel’s security,” 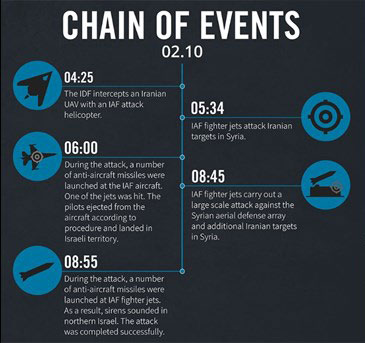 The article goes on to say that Liberman was disturbed by what was happening on Israel’s Northern front. It stated:

“According to Liberman, while Israel wants to live quietly, the turbulent reality of the Middle East makes the word “‘peace’ irrelevant”; the only way to live here quietly is to prepare for war.”

So it’s all heating up to the North of Israel and it might not take much for things to escalate. Interestingly Iran is closely allied with Russia and so any conflict with Israel could easily see Russia sweeping back down into Syria in order to ease tensions.

Why is this interesting to the Bible student? Because Iran is mentioned directly in latter day Bible prophecy as being an enemy of Israel and for being part of an invasion from the North which is only halted by the Lord Jesus Christ upon his return to the earth.

In the latter day prophecy of Ezekiel 38 an invading power termed “Rosh”, an ancient name for Russia is identified as the leading power in this Northern invasion. In verse 5 of that chapter “Persia” is mentioned as being “with them”. Persia is the ancient name for Iran. It was only in 1935 that Persia rebranded. The Iranian government requested those countries which it had diplomatic relations with, to called Persia “Iran,”. We still have the name “Persian Gulf” on our maps today, a remnant from those times.

It is also interesting to consider prophecies like Daniel 11. In this latter day prophecy from verses 40 to the end we again have a picture of the invasion. Again we are told it is by the “king of the north” who sweeps down through Israel.

Back in Ezekiel 38 we are told the invaders come from their place “in the north parts” (v15).

Therefore as we see things heating up to the North of Israel, with Iran involved and their allies Russia watching on, let us remember that God has revealed the state of the nations before his son will return and that we can expect those to the North, and especially Iran, to be antagonistic as the orchestra of national aggression against Israel builds to its ultimate crescendo.

Annexation of the West Bank Rumours

One such subject which could cause things to escalate is the rumoured annexation of the West Bank – the Biblical area known as Judea and Samaria. This would be highly controversial but this week rumours  of it’s possibility were in the press.

On Monday 12th Reuters had an article entitled “White House dismisses idea of U.S.-Israel discussing settlement annexation”. In the report the US were rejecting the idea that they had had such discussions. Interestingly though this was not the impression of Israeli Primminister Benjamin Netenyahu. This is what the report stated:

“On the subject of applying sovereignty, I can say that I have been talking to the Americans about it for some time,” Netanyahu told a closed-door meeting of his right-wing Likud party’s legislators, according to the party’s spokesman. Netanyahu was referring to applying Israeli law to the settlements, a step tantamount to annexation. They are currently under the jurisdiction of Israel’s military, which has occupied the West Bank since the 1967 war.”

In a parallel prophecy to that of Ezekiel 38 words which seem to be a message to the nations just before Armageddon are penned and they closely match those that we have looked at from the Israelie Defence minister Liberman. He stated that “the only way to live here quietly is to prepare for war.”

In Joel chapter 3 and verse 9 we read this:

“Proclaim ye this among the Gentiles; Prepare war, wake up the mighty men, let all the men of war draw near; let them come up:”

The chapter goes on to explain the dramatic battle of the conflict between the nations and God, who will use the battle to “judge the nations” (v12) who come against the regathered people of “Judah and Jerusalem” (v1). This is the “battle of armageddon” mentioned in Revelation 16.

It is at this time of the invasion of the nation that we read God acts.
“The LORD also shall roar out of Zion, and utter his voice from Jerusalem; and the heavens and the earth shall shake: but the LORD will be the hope of his people, and the strength of the children of Israel.”

So as we see the nations preparing war and all the turmoil, hurt and pain this will cause to those involved, let us realise that the time of the return of Christ is at hand and keep our mind fixed on living lives in glory to God as we await the coming Kingdom of peace and righteousness of that time.

The Lord Jesus Christ taught us to “seek first the Kingdom of God and His righteousness” . He also taught us in Luke 11:2:
“When ye pray, say, Our Father which art in heaven, Hallowed be thy name. Thy kingdom come. Thy will be done, as in heaven, so in earth.”

How we look forward to the return of Christ, the son of David to return and sit on the throne of his father David and restore the Kingdom again to Israel. To rule in righteousness and in peace. For the time when the law shall go forth from Zion and the word of Yahweh from Jerusalem.

This has been Matt Davies joining you – visit again next week God willing, for another Bible in the News.