Archaeologists Announce the Discovery of the seal of King Hezekiah
Click on the image to watch the video, or the audio link to listen.
[youtube https://www.youtube.com/watch?v=6z1zxEed3ME&w=560&h=315]
Visit http://www.bibleinthenews.com/home/ for 100’s of reports since 2006

Print
December 4, 2015 – Audio, 9.35 MIN
(Links at bottom of page to download free viewers.)
“Incredible Archaeological find brings Bible to Life” was the heading of the lead news story on Israel National News on December 2. To find any king’s personal seal from 2700 years ago would be incredible, but to find the seal of Hezekiah king of Judah is not only incredible, it also has great significance for us and today’s world. Welcome to Bible in the News, this is David Billington with you this week. 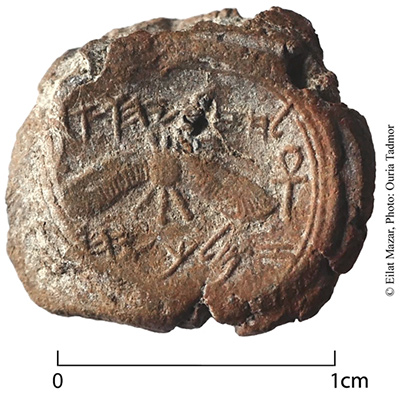 The seal of Hezekiah king of Judah discovered in Jerusalem.

Extra-Biblical evidence for the existence of King Hezekiah has been around for many years – one can literally walk through Hezekiah’s tunnel under the city of David today. 2 Chronicles 32:30 records the construction of this amazing water tunnel. “This same Hezekiah also stopped the upper watercourse of Gihon, and brought it straight down to the west side of the city of David. And Hezekiah prospered in all his works.”

There have also been other seals of Hezekiah found which have appeared on the antiquities market. However, this particular seal was the first ever seal of “an Israelite or Judean king ever exposed in situ in a scientific archaeological excavation.” according to archaeologist Dr. Eilat Mazar. The discovery was made by the Hebrew University of Jerusalem’s Institute of Archaeology under the direction of Dr. Eilat Mazar during Ophel excavations at the foot of the southern wall of the Temple Mount. The impression bears an insc‎ription in ancient Hebrew sc‎ript reading: “Belonging to Hezekiah [son of] Ahaz king of Judah.” You can read more about the archeological details of this discovery on archeologist Leen Ritmeyer’s website: Ritmeyer Archaeological Design – www.ritmeyer.com

This archeological find gives us a personal connection to righteous king Hezekiah. 2 Chronicles 30:1 records how Hezekiah sent out letters, which were personal invitations for the tribes of Israel to come and worship in Jerusalem: “And Hezekiah sent to all Israel and Judah, and wrote letters also to Ephraim and Manasseh, that they should come to the house of the Lord at Jerusalem, to keep the passover unto the Lord God of Israel.” These personal invitations would have borne the seal of King Hezekiah. This particular symbol is different from those perviously discovered and it is suggested that this changed “special edtion” seal may have been used by Hezekiah later in his lifetime, after he had recovered from his deadly illness and the sundial had been turned back. The seal in fact does show a symbol of the sun with wings.

The discovery of this ancient seal of a Judean king, in the dust of Jerusalem reinforces the Jewish and Hebrew connection to the land. In order to read the inscription one must understand the language of the Hebrews, a language that also lay lifeless in the dust for centuries and has now once again become a living language. Had the nations and peoples that occupied the land during the Jewish dispersion made the discovery, they would have been unable to read the writing, nor make known the interpretation. The discovery and its meaning belong to the Jewish Hebrew people.

The land of Judah at the time of Hezekiah was under great threat from the Assyrians in the north. Isaiah 36:1 tells us that, “Sennacherib king of Assyria came up against all the defenced cities of Judah and took them.” Under this great threat from the north there existed two parties in Israel. One followed Hezekiah who trusted in Yahweh the God of Israel. This group could be called the “strengthened of Yah” party – the meaning of Hezekiah’s name. The other group in Judah at the time, were those who turned to Egypt for help and deliverance from the Assyrians. These are mentioned in Isaiah 31, “Woe to them that go down to Egypt for help; and stay on horses, and trust in chariots, because they are many; and in horsemen, because they are very strong; but they look not unto the Holy One of Israel, neither seek the Lord!”

This party who trusted in the arm of flesh, was led by Shebna, the treasurer who was over the house. He is condemned in Isaiah 22:15-25. “Behold, the Lord will carry thee away with a mighty captivity, and will surely cover thee. He will surely violently turn and toss thee like a ball into a large country: there shalt thou die, and there the chariots of thy glory shall be the shame of thy lord’s house.” God informs Shebna that he would lose his position and Eliakim the son of Hilkiah would assume his role. When we come to Isaiah 36:22, this change has taken place and Eliakim is over the household.

Those that wanted to go to Egypt for help are also condemned in Isaiah 30:1-3

“Woe to the rebellious children, saith the Lord, that take counsel, but not of me; and that cover with a covering, but not of my spirit, that they may add sin to sin: That walk to go down into Egypt, and have not asked at my mouth; to strengthen themselves in the strength of Pharaoh, and to trust in the shadow of Egypt! Therefore shall the strength of Pharaoh be your shame, and the trust in the shadow of Egypt your confusion.”

Yet there was in Judah the Hezekiah party, that trusted in the God of Israel. Faith had been developed in them through the early work of Hezekiah and the invitations to worship at the great passover.

The situation in Israel is similar today. There are those who trust in the “king of the south”, in the United States for deliverance. Just like the days of Hezekiah, the “king of the south” will be their shame and confusion. On the other hand there are those in Israel today, who are turning to the prophets and are searching for a Biblical direction forward. This is the developing “Hezekiah Party” in the nation. Over time this group will continue to grow in faith, especially when they are instructed in the ways of the God of Israel, just as those would have been that made the journey up to Jerusalem to worship at Hezekiah’s great passover.

Isaiah 30 is in fact a prophecy that relates to our time – the latter day. In verse 8 some literal translations and some Bible margins indicate the correct sense of the Hebrew text, that this is a prophecy for the “latter day”. Isaiah 30 tells us that the Jewish people will dwell in Zion at Jerusalem, God will hear their cry, there will be times of adversity and affliction, yet God will send teachers to them who will show them the way to walk in – the way of truth.

“For the people shall dwell in Zion at Jerusalem: thou shalt weep no more: he will be very gracious unto thee at the voice of thy cry; when he shall hear it, he will answer thee. And though the Lord give you the bread of adversity, and the water of affliction, yet shall not thy teachers be removed into a corner any more, but thine eyes shall see thy teachers: And thine ears shall hear a word behind thee, saying, This is the way, walk ye in it, when ye turn to the right hand, and when ye turn to the left.”

Unfortunately, today in Israel we witness the continuing times of adversity and affliction – terrorism and yet we see that all this is preparing the hearts of the people to be instructed in the way of truth. In the rest of the chapter we read about the invasion and beating down of the later day Syrian.

Those that are “strengthened of Yahweh” have a song and go up to the mountain of Yahweh as they would in a night time festival. The holy feast that took place at night was the passover. Isaiah 30:29

“Ye shall have a song, as in the night when a holy solemnity is kept; and gladness of heart, as when one goeth with a pipe to come into the mountain of the Lord, to the mighty One of Israel.”

So we look forward to that day when invitations bearing the seal of the king of Israel, will go out to all the tribes of Israel, to come and worship in the holy mountain in Jerusalem.

Join us again next week God willing as we witness the Bible coming to life in the news.