Libyan General Khalif Haftar boarded the Russian Aircraft Carrier as it passed through the Mediterranean waking the world up to the fact that Russia is now sticking its oar into the Libyan waters as its next point of influence. Bible prophecy has predicted such a move and we watch with great interest as the angels are at work

As the world concerns itself with Trump’s ban on refugees, and debates the legalities of his decrees, we turn our attention to the Mediterranean and Libya. As we discussed several months ago, Russia has been quietly courting Libya’s General Khalif Haftar.

As angels are buys with players on the world chess board, reoriented them into position for Ezekiel 38 and Daniel 11 to play out, we are reminded that one of these players is Libya as we read in Ezekiel 38:3-5

“Thus saith the Lord GOD; Behold, I am against thee, O Gog, the chief prince of Meshech and Tubal: And I will turn thee back, and put hooks into thy jaws, and I will bring thee forth, and all thine army, horses and horsemen, all of them clothed with all sorts of armour, even a great company with bucklers and shields, all of them handling swords: Persia, Ethiopia, and Libya with them; all of them with shield and helmet:” (Ezekiel 38:3–5)

“He shall stretch forth his hand also upon the countries: and the land of Egypt shall not escape. But he shall have power over the treasures of gold and of silver, and over all the precious things of Egypt: and the Libyans and the Ethiopians shall be at his steps.” (Daniel 11:42–43)

We examined the background of Libya, and its connection to Russia a while ago. This quiet relationship between Russia and Libya made its way back into the news in the past few weeks. As the Russian aircraft carrier Admiral Kuznetsov steamed back from Syria to its Baltic port, it travelled by Libya where it made a stop, inviting General Khalif Haftar aboard.

This move has sparked commentary from many political sources who see Russia’s involvement in Libya as an extension of its Syria policy, expanding its influence. 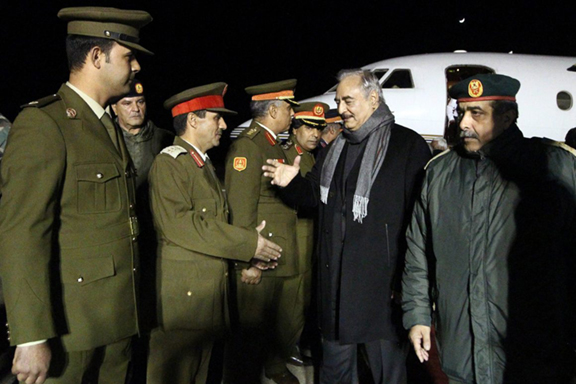 France 24 held an interview with Anaurd Dubien, the director of the France-Russia Observatory, who stated:

“the Russians are pursuing a concrete policy by openly betting on Haftar, who leads the dominant force in Libya…. It would be effective for the Russians to play the Libyan game after the Syrian one, which is coming to a close, in order to mark their influence in the Mediterranean by saying that as in Syria, so in Libya too: we are unavoidable….

Vladimir Putin sought to reinvest in the African continent, and more generally in former Soviet allies. However, this time the framework of the new engagement was less ideological and more concerned with economics…

It was perceived by Putin, in the context of the Arab Spring, as something engineered by the West and a definite threat to Russian influence, and preventing the West from repeating their Libyan actions in Syria became one of the principal motivations for allying so closely with Bashar al-Assad’s regime in Syria.”

Now Russia is moving to pick up the pieces back in Libya and wrestle it from the grip of anarchy.

Russia moves into the vacuum created by the USA withdrawal.

The Obama administration played heavily into Russia’s hands by taking a disengagement strategy throughout the world, and especially the Middle East.

Russia’s increased involvement in Libya is another sign that President Vladimir Putin seeks a resurgent Russia that holds sway with allies throughout the Middle East.

Russia has taken advantage of the outgoing administration’s penchant for leaving behind power vacuums. Obama’s withdrawal of troops in Iraq allowed ISIS to gain territory there and across the border in Syria. Similarly, Obama’s refusal to follow through after his chemical weapons red line in Syria made it clear that the United States wouldn’t act to prevent Assad from slaughtering his people in a brutal civil war. Russia stepped easily in to become the primary outside influencer in that war.

Obama’s action (or inaction) in Syria has also allowed Russia to test its military equipment and practice tactics and maneuvering there, a rehearsal that it can now take on the road, both in eastern Europe and elsewhere in the Middle East and North Africa. This brings to mind German and Italian aid to the fascists in the Spanish civil war in the 1930s. Their support ensured them a fascist ally with French borders during World War II and gave them the opportunity to test their newly rearmed militaries and air forces.

Germany’s lightning war strategy was tested in fascist Spain, and the tactics were quickly deployed in the Nazi Germany’s, Blitzkrieg, or lightning war as its troops raced across Europe, enslaving its masses with barely any successful resistance until it became bogged after turning on its Russian ally.

Oprea reflects on Trumps arrival as reminiscent of the Americas position prior to World War II:

Trump’s remarks since announcing his run for presidency have also smacked of an isolationism reminiscent of Obama’s foreign policy. Trump’s call for an “America first” policy hearkens back to American isolationism of the 1920s and ‘30s, when there was a general feeling that we shouldn’t have anything to do with troubles abroad. This emboldened belligerent countries, who took this as a sign that the United States wanted nothing to do with Europe’s problems and wouldn’t intervene in any renewed conflicts.

The refugee influx into Europe has created a crisis. Many of the refugees have come from Syria and North Africa. In light of this, Europe has begun changing the way it has been dealing with Russia. In fact, the refugee crisis hitting the shores of Italy and France is mostly coming from North Africa. European nations have begun to look to Russia to help solve the crisis by restoring stability in Libya.

CNN reported this past week:

EU leaders are turning to Russia as they seek to stabilize Libya, stem the flow of migrants departing its shores for Europe and combat Islamist terrorism.

This is following success in Syria, as the same CNN piece reflected:

Anna Walker, associate director for Europe at the business risk consultancy Control Risks, said Russia was seeking to exert its influence in the region to help reinforce its position as a power on the world stage.

In Syria, Russia has been able to act as a power broker, bringing the warring sides together for talks where others have failed, Walker said — and it may seek the same role in Libya. “Certainly by engaging with different political actors in Libya, it’s looking to reassert its presence there, not necessarily militarily but as another power player in the region,” she said.

While Italy and some European leaders are looking toward Russia, others, such as Malta are concerned with the Russian influence in the area. The publication Politico reported this past week: 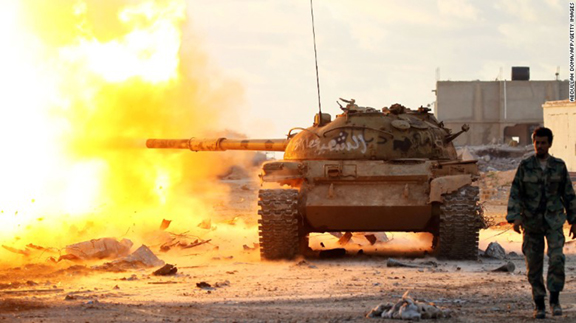 War in Lybia is creating a refugee crisis in Europe. Europeans call on Russia to intervene.

Having cemented Russia’s role as the dominant belligerent against a pro-Western Ukraine, where the half-frozen conflict in the east has flared up in the past week, and in Syria where a fragile ceasefire has taken hold with Moscow’s ally Bashar al-Assad still in power, President Vladimir Putin has turned his attention to Libya.

For Europe, this raises the worrying prospect that Russia could gain control over the flow of migrants across the central Mediterranean, giving Putin leverage to destabilize Europe by unleashing a flood of refugees like the exodus from Syria that caused a crisis in Europe in 2015.

Some European nations believe that Putin making strategic use of the refugee crisis to bring Europe onside with his political aims and objectives.  By allowing refugees out of areas it controls, or creating a situation where refugees might want to flee, pressure can be applied on Europe.

Many EU leaders mistrust Putin’s motives, fearing Russia will impede international efforts to strengthen the fragile government in Tripoli by encouraging continued fighting or even installing a pro-Russian government. Libya is the main launching point for migrants crossing the central Mediterranean to Europe. Efforts to halt such crossings, and the potential for Russia to complicate them, will top the agenda at the Malta summit.

So having Syria tied up, with an air base and naval port, Libya would be a strategic and convenient place to expand their influence. The same Politico article stated,

Russia, appears to be working to end the U.N. embargo on arms sales to Libya and has made clear it wants to provide greater assistance to Haftar and his forces in the east. During his visit to the Kuznetsov aircraft carrier, Haftar was given medical supplies for Libyan fighters.

Russia is in the process of achieving day by day a role in determining the balance … in the Middle East and now in the Mediterranean — it is a role that must be acknowledged.

Whatever political, economic or strategic interests Russia has, we know her destiny is to be aligned with Libya in the latter days. As we see the angels at work in arranging world affairs, we know the days are short.  Let us look up and lift up our heads for our redemption is drawing nigh.