Earthquakes as the Pope Meets Putin
Earthquakes real and political shake the world.

Print
July 6, 2019 – Audio, 7.56 MIN
(Links at bottom of page to download free viewers.)
The earthquake that rocked California this week reminded us that our whole environment can change so quickly and unexpectedly. There is something about our psyche that expects things to continue as we have always known them to be. Something that echos the words of 2 Peter 3:4 which says, “Where is the promise of his coming? for since the fathers fell asleep, all things continue as they were from the beginning of the creation.” Earthquakes are like that, even though humans may theoretically expect them, they don’t expect their worlds to be rocked and changed in the way they can be when these types of things happen. In an earthquake suddenly everything is moving, nothing is stable and everything is changing. We may theoretically expect the coming of Jesus Christ, but do we live that way everyday? Naturally we are more likely to think, “Where is the promise of his coming?”

Jesus  Christ had a warning for his day, which equally applies to us. He said, “Verily I say unto you, This generation shall not pass away, till all be fulfilled. Heaven and earth shall pass away: but my words shall not pass away. And take heed to yourselves, lest at any time your hearts be overcharged with surfeiting, and drunkenness, and cares of this life, and so that day come upon you unawares.” The Jewish rulership of that age was to be removed, the nation was to be scattered out of the land, everything would change, nothing would be fixed, it would all pass away. It’s the same for us. The rumblings of the end of our Western societies are well under way. Our Bible based family value systems are crumbling, indeed gone. Without this our societies cannot sustain themselves. The only way most Western societies sustain growth is by immigration of people with a different value system. “Overcharged with surfeiting, and drunkenness, and cares of this life”, is a very fitting description of our societies. Everything we’ve known is in fact shaking and changing. 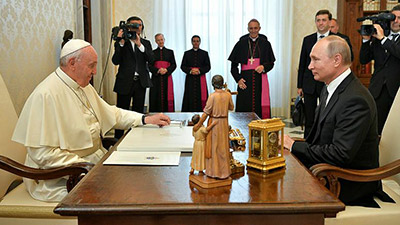 The Catholic Pope meets Putin at the Vatican.

The political world is also rapidly changing, in an amazing way fitting so well with what those that have held to our prophetical heritage have expected. The Arab world is divided along two distinct lines. Those allied with Russia and those with the merchant powers of the world, just as described in Ezekiel 38 and other prophecies. The Gulf States getting closer and closer to Israel, which at one time was an anathema. Meanwhile Iran and Syria remaining completely hostile and on the brink of war, supported by Russia and often Europe. Relations between Russia and the trading powers, with Britain and the United States at the forefront, are at an all time low as a result of the war in Ukraine, Crimea and after Sergei Skripal and his daughter Yulia were poisoned in the UK. Europe however sees Russia as an essential partner, and despite all continue to work with that philosophy, resulting in President Trump’s sharp rebuke of Germany for its continued reliance on Russian energy and moving forward with the Nord Stream 2 project which he says will leave Berlin captive to Moscow. On June 12, Bloomberg reported, “Trump Threatens Merkel With Pipeline Sanctions, U.S. Troop Cut”. Russia says efforts to block the pipeline amount to “blackmail”.

In the prophecy of Daniel religion and politics mix in the vision of the four beasts in chapter 7. These four beasts run parallel with the segments of the image of Daniel chapter 2. In Daniel 7 the fourth beast actively engages in religious matters with his mouth which speaks “great words against the Most High”, wearing out the saints of the Most High and thinking to change religious times and laws. This fourth beast is undoubtedly Rome which in its various forms has engaged in warfare with the holy ones of the Most High down through the centuries. This religious aspect of reflected in the Babylonish head of gold in Daniel 2, called in Revelation “Babylon the Great”. The metals of the image each represent a phase of the kingdom of men: the head of gold, Babylon; the chest and arms of silver, Medo-Persia; the belly and thighs of brass, Greece; the two legs of iron, the Eastern and Western Roman empires; and finally, the fragile feet of iron and clay, the western and eastern European nations, including Russia, which though having “one mind” form a fragile union destroyed by the little stone power. Even though each metal represents a phase, in the end the whole image stands as one empire tottering on the fragile semi-democratic feet. This is evident from Daniel 2, where the prophecy tells us that the image was “broken to pieces together”. In order for the image to be broken together, it must stand together as one image empire. So we clearly expect the emergence of a latter day Roman Empire, tottering on it’s semi-democratic clay and iron feet, yet as the prophet describes, “the form thereof was terrible”. Its voice issuing from the Babylonish mouth will also be terrible, making supposed religious pronouncements against the Most High.

The report therefore of the Pope meeting Putin, is of great interest with these prophecies in mind and many others, which we have discussed here, on Bible in the News, from time to time. This is in fact the rumblings of a massive political earthquake which will eventually result in the erection of the formidable image of Daniel chapter 2. Bloomberg ran the headline, “Putin Meets Pope as Relations Thaw Between Russia and Vatican” The talks took place a day before the Pope chaired a meeting on Ukraine. The article said, “President Vladimir Putin met Pope Francis in the Vatican on Thursday, amid signs of closer ties between the Kremlin and the Roman Catholic Church”, and, “The Pope and Putin “expressed their satisfaction” at how ties are developing, the Vatican said in a website statement.”  EuroNews reported that, “The meeting, which lasted just under an hour, is said to have focused on the situations in Syria, Ukraine, and Venezuela, which Putin ultimately said was “very substantive and interesting.”

All these events should arrest our attention, as we expect that great day when the Creator will shake the earth. “And they shall go into the holes of the rocks, and into the caves of the earth, for fear of the Lord, and for the glory of his majesty, when he ariseth to shake terribly the earth.” Isaiah 2:19

As we have considered the Bible in the News this week, it should help us to remember that the great day is coming, when nothing will be the same, everything will change, and the kingdoms of this world will become the kingdoms of the LORD and of his Messiah, the king of Israel. Thanks for listening  this has been David Billington with you for the Bible in the News at www.bibleinthenews.com

The readings for today, September 25 are: 1 Chronicles 8
Ezekiel 21
Luke 18
Our website uses cookies from third party services to improve your browsing experience. Read more about this and how you can control cookies by clicking "Privacy Preferences".
X
X