Britain, the Bible & Europe
For the second time in my lifetime Britain is to hold a referendum on European membership. 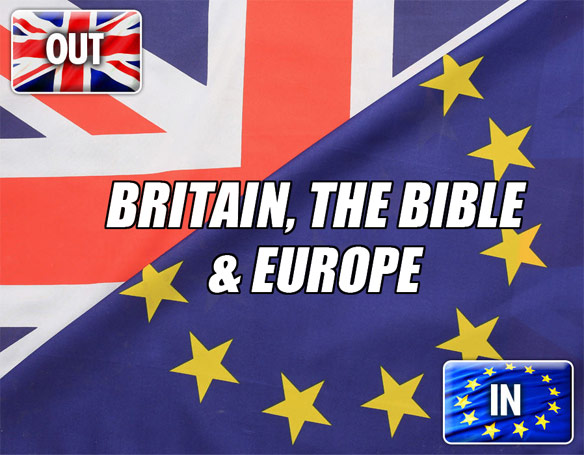 Hello: This is Paul Billington bringing you this week’s Bible in the News. On Thursday June 5, 1975, the people of Britain were asked to vote “Yes” or “No” to membership of what was then called “The Common Market.” Pamphlets were sent out to everyone by the Government of Prime Minister Harold Wilson. The official Government pamphlet read: “Britain’s New Deal in Europe: Her Majesty’s Government have decided to recommend to the British People to vote for staying in the Community.” Now, over forty years later another referendum is to be held onThursday, 23rd of June 2016, and the Government of David Cameron has sent out a pamphlet with the heading “Why the Government believes that voting to remain in the European Union is the best decision for the UK.” 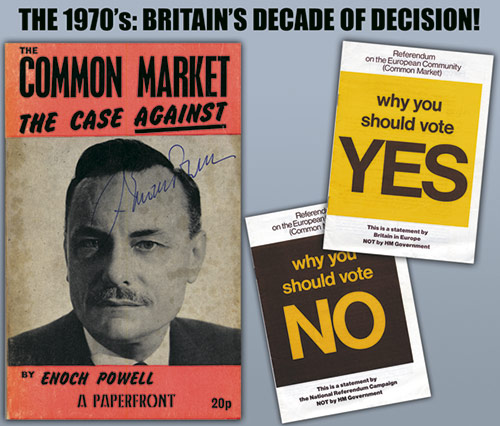 But is it? Scaremongering and a “project fear” are being used in this fierce campaign, and there is good reason for it.

News media are telling us that (at present) opinion is more or less divided. The “Remain in” group are presented as having a slight edge – but with another month to go anything can happen.

Britain’s separation from Roman Catholic Europe goes all the way back to the time of King Henry VIII (at least) and even to Tyndale’s translation of the Bible into English – and it was the influence of the English Bible that really brought about the original separation.

But as things are, Britain has chosen the path of association with Catholic Europe. This must be expected to change. We do not know the details, but we are justified in anticipating Britain’s eventual isolation from Europe – at some stage a breaking-point will be reached. But the coming referendum is hardly likely to settle the issue. As Europe moves along the road to a Catholicized socialism, British business interests will be forced to seek trade and friendship elsewhere. This will affect other English-speaking nations also.

On what basis is it claimed that Britain will separate from the EU? It is simply this: she cannot be on BOTH SIDES in the coming conflict foretold by the Prophets (especially Ezekiel 38)—either she must be with the latter-day northern power, allied with Russia and Catholic Europe, or she is to be identified with the southern group of “Sheba, Dedan and the merchants of Tarshish with all the young lions thereof.” She CANNOT be on both sides at the same time. 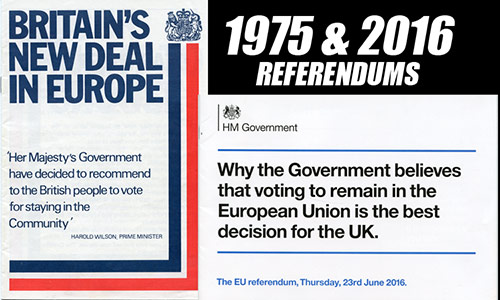 Which side will Britain be on? There is evidence to show that Britain is identified in prophecies that concern those who PROTEST AND OPPOSE the aggressive northern power that comes to invade Israel. She cannot protest and oppose herself, she is therefore PERFORCE, NOT PART OF THE EUROPEAN SYSTEM when Ezekiel’s prophecy is finally fulfilled. For this reason, writers over many years – some over a century ago – have seen Britain as being separated from Europe.

The coming referendum is Britain’s opportunity for an escape, if she had faith enough to take it. But Britain’s Biblical culture has now been abandoned, so what can nations expect when they reject the word of God in the Bible, and forget God?

The principle is surely stated clearly enough by the Psalmist: “The wicked shall be turned into hell, AND ALL THE NATIONS THAT FORGET GOD.” – Psalm 9:17.

Britain and the English-speaking peoples are indictable on the following grounds:
1. Rejecting the Bible as the Word of the Living God and replacing its teachings with humanism and theories such as evolution.
2. National Immorality: laws controlling wickedness have been abandoned bringing sexual license, gambling, social perversion and crime.
3. The acceptance of Roman Catholicism as a respectable religious organisation, overlooking idolatry, results of clerical celibacy and interference in the political process.
4. In Britain’s case, transferring national sovereignty to Catholic Europe (in the 1975 referendum) and thereby enslaving the country to her traditional enemy.
5. Government attitudes to Israel and the Jews have often been shameful, particularly since WW2 in Britain’s case. This must be accounted for.

It is because Britain and other English-speaking nations have ignored the warnings of Scripture (and the warnings of those who were enlightened by this Word) – and have foolishly allowed Roman Catholicism to infiltrate and weaken them, that defeat will come. As Delilah charmed Samson and deprived him of sight and strength, so the harlot of Rome is working to bring about the ruin of the English-speaking world. Britain is being bound and chained by her membership of the European Union with its laws and directives – when she wakes up to the realisation of her plight, her strength will be gone!

Whatever the result of the coming referendum in June: in or out, Britain has serious trouble coming. As it was once put: “Trouble Ahead for Tarshish!”

The God of Heaven is just and righteous in all His ways, but what is to become of nations who have been exposed to the word of God (as Britain was), have been addressed through it, have even been moved by it to fulfill His great purposes; have also been delivered as in WW2 – but then turned their backs upon God and despised the Holy Oracles? What is to become of nations we ask, who refuse to hear the cry of the Prophets, preferring science fiction and the myths of atheistic dreamers? Hear what the Almighty says through the prophet Jeremiah:-

This infallible principle will apply to all of the independent English-speaking nations who each bear their own responsibility before God. They will be held ESPECIALLY responsible for the way in which they respond to Bible teaching and treat His people, the Jews. The principle was seen with Ancient Tyre who was addressed as follows:

“Thou hast defiled thy sanctuaries by the multitude of thine iniquities, by the iniquity of thy traffick; therefore will I bring forth a fire from the midst of thee, it shall devour thee, and I will bring thee to ashes upon the earth in the sight of all them that behold thee. All they that know thee among the people shall be astonished at thee: thou shalt be a terror, and never shalt thou be any more” (Ezekiel 28:18-19).

If these words are to find a secondary fulfillment in the latter-day Tyre in its ‘Tarshish’ lands or ‘isles.’ then we may be assured of a terrible and dreadful judgment that is to be poured out upon those who have hardened their hearts against God. The word through Ezekiel says: “…therefore will I bring forth a fire from the midst of thee, it shall devour thee…” What could this mean?

Avro Manhattan has painted this scenario for the United States in his book THE VATICAN MOSCOW WASHINGTON ALLIANCE:

“…fifty-five million Americans, many of them in positions of influence, could be a formidable minority if they supported Catholic Marxism (i.e. socialism). The vast network of the Catholic Church could provide a most efficient vehicle of subversion throughout the United States. Such a network, buttressed by religious, (including Islamic), social and cultural pressure groups, could interpenetrate the most sensitive and the most influential strata of American society…

“Should the Vatican strategy succeed, an even wider section of the U.S. church will be gently nudged towards the gradual acceptance of a form of socialism (such as Obama has been employing). This would mean the creation of a revolutionary minority which would carry on their subversion against American democratic institutions, disguised as a religious group exercising their rights under the First Amendment to the U.S. Constitution…

“To talk about Catholic fifth columnists sounds discriminatory. Yet, one generation ago, Catholic minorities helped to destroy democratic Europe. This they did by cooperating with Hitler. They helped Hitler because they were fired with ideological zeal…” 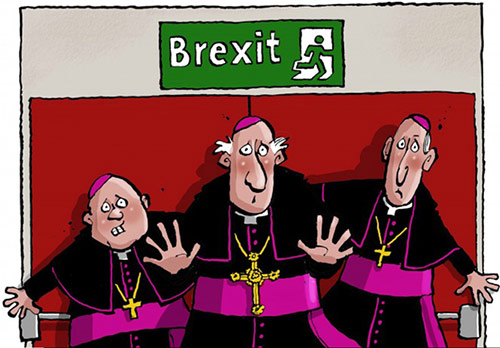 The use of force in given situations is endorsed in several theological works, both Catholic and non-Catholic. There has been the use of the term “just war,” or as a Professor J.G. Davies of Birmingham (UK) expressed it in his book Christians, Politics and Violent Revolution (1976, SCM press): “resort to force must be regarded as just, if the cause is just.” The struggle against Western  capitalism would conceivably be regarded as “just” by the Church and could be grounds for subversive activity from Catholic-inspired “peace movements.”

In view of pseudo-christian teachings, the potential for subversive activity in a time of crisis is very great if the Church happened to think it suited its purpose. We hardly need to explain what this could mean if social anarchy and violence swept through the streets.

Today, as we see Britain under its present political leadership becoming more enmeshed in its association with Europe, we are right to fear for the future and to urgently warn of the consequences that could follow. Such a course will not bring God’s blessing upon Britain. The closer Britain becomes tied to Europe now, the worse it will be for her when the time to separate comes. Europe may well insist upon Britain maintaining links she has agreed to – and we must not be surprised if this issue brings violence onto the streets. Some leading political figures have already warned of such a possibility – and that would certainly bring about the situation described by Ezekiel: “a fire from the midst of thee…”

We do not know, because we are not told, exactly what will happen in the coming referendum. The Scripture principle is there for us to consider – and it provides a basis for warning those around us of what could happen. When subversive action and violence breaks out as “a fire from the midst of thee” – it will be too late then to hear the words of Christ: “O fools, and slow of heart to believe all that the prophets have spoken” (Luke 24:25).

Join us again next week for another edition of the Bible in the News.