Watch the video version below.

Print
January 31, 2020 – Audio, 11.59 MIN
(Links at bottom of page to download free viewers.)
Its finally happened! 11PM on the 31st of January 2020. In dramatic scenes, Britain has left the European Union vindicating the faith of Bible believers and signalling the soon return of the Lord Jesus Christ from heaven. 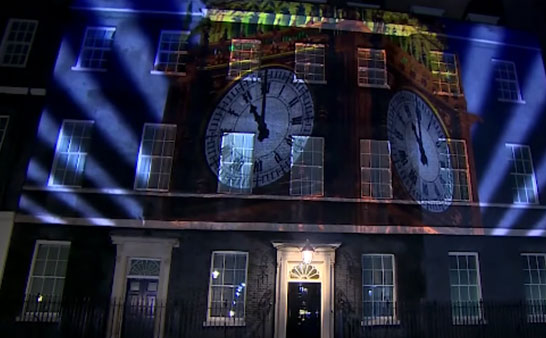 The moment of Brexit. Big Ben Bongs and is projected onto 10 Downing Street. (Source: The Guardian)

Britain the “Tarshish” of the Bible

But how can we say such a thing? Because, as we have long discussed on Bible in the News the only honest fit for the nation called in the Bible “Tarshish” is Britain.

Consider some of the clues we get from scripture about this nation:

By piecing these and other clues together, the only fit as to which nation Tarshish should be identified as is Britain.

The state of the nations before Christ returns

In the Latter-day prophecy of Ezekiel 38, which the prophet Ezekiel through the inspiration of God was caused to write, it depicts the state of the nations just before Christ returns.

In verses 1-9 we read of a Russian, European, North African and Far Eastern confederacy of nations which come against Israel, when Israel is at peace (and its interesting in this context to watch what will happen with Donald Trumps recent proposals in this direction).

In verse 13 though we read of another set of nations – the Southern nations of the Arabian Gulf (Sheba and Dedan), as well as the trading power of Tarshish, are listed as being separate from the invader and they feebly challenge the invasion.

Bible students understood Britain had to be separate from the EU

Many Christadelphian Bible students of prophecy expected Britain to be separate from Europe. Notably:

When Britain entered the EEC in 1973 many Bible believers were disappointed. The picture did not fit the prophecies of the Bible. The Tarshish power must be politically, economically and militarily separate form the powers of the EU at the time of the end. Some, in faith, wrote about this in various publications and many spoke on the subject in the Christadelphian community. Here are a few examples: 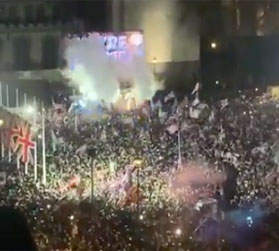 At 11PM (UK time) on the 31st of January 2020 the faith of these Bible believers has been vindicated as Britain, the Tarshish of scripture, set sail from Europe to take up its position as the trading lion power of Tarshish in the latter days. 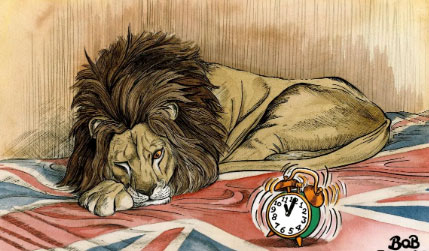 Cartoon depicting Britain as a sleeping Lion being woken up by Brexit
(Source: Telegraph   Credit: Bob)

UK Prime Minister, Boris Johnson put it like this in his address to the nation. He said this is a “new dawn” for Britain and that Brexit is “not an end, but a beginning”.

Interestingly the Brexit campaigner, Nigel Farage was reported to of said this: ‘I’ve got to see the sun rise over an independent United Kingdom! This is the biggest constitutional change for us since Henry VIII left the Church of Rome. It’s the biggest shift in 500 years. It’s the point of no return!.’

What a dramatic statement for the Bible believer to hear, who recognises Britain is Tarshish and that she sits outside of the political system depicted in prophecy as a Beast with ten horns in Daniel 7. This beast is said to come up out of the Mediterranean sea and is a symbol of a Mediterranean Kingdom which we believe related to Europe (Daniel 7:2 and 17-18). In Revelation 17, this ‘European Super- Power beast’ in its final phase is said to have a harlot women sitting upon it which is identified with apostate Christianity and particularly the Roman Catholic System. When considering who the ten horn powers would be on this beast John Thomas concludes Britain is not one of these “powers”. He writes in Eureka:

“Another objection to England being numbered with the ten (horns), is, that she is not a country of the Great Sea world. The ten horns were to ascend out of the Mediterranean upon which Daniel saw the tempest raging… But the British Isles afar off have no relation to it all””

Britain’s destiny is separate from Catholic Europe. Her destiny is to be a trading nation and she is set to take up position in the Gulf along with Sheba and Dedan as set out in the prophecy of Ezekiel 38.

And Britain is set to begin to become that merchant trading power the prophecies depict. America, her chiefest lion, is first in line with trade talks starting on Monday.

These are exciting “sign’s of the times” because we know from the Bible that when the northern invader attacks Israel that is then when Christ and his resurrected and immortalised followers appear on the world stage to save Israel (see Zech 14 and Revelation 16 for example). Christ in that day will set up God’s Kingdom and rule on David’s throne from Jerusalem (Isaiah 2, Luke 1:32, Rev 5:10).

What an exciting Bible in the News therefore we have considered this week as we witness the hand of God in world affairs bringing about geo-politics as He has decreed in His word.

We are reminded that we are but strangers and pilgrims awaiting a city whose builder and maker is God and not man (Hebrews 11).

Small gatherings of those who follow Bible prophecy took place in various places across the world to mark the event and to thank God that we are privileged to witness his majestic hand at work in world affairs and we hope to place links to the various talks held at these events as they become available (watch this space!) 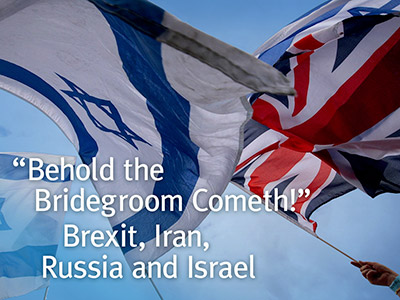 Special Presentation given on January 30, the day before Brexit in Brantford, Ontario by David Billington. Click here for audio and slides.

These things should stimulate our Faith. In another context the Lord Jesus Christ sets out a principle of prophecy in John 14:29. He says: “And now I have told you before it come to pass, that, when it is come to pass, ye might believe.”

We have been told beforehand how the nations will be aligned. We are seeing it come to pass. But do we believe? Let us prepare for the return of Zions king. The time is short.

This has been Matt Davies joining you for another Bible in the News. Come back next time as we watch and wait for the sure return of the Lord Jesus Christ to the earth to reestablish the Kingdom of God on earth.