Brexit, America and Israel
The Fight for the West & Israel

It is March the 31st, and by now the United Kingdom of Great Britain, Wales, Scotland and Northern Ireland should be free from the European Union.  Except it isn’t, as you probably know.

If you have been watching the British News you know the great count down was to March 29th.  The people of the United Kingdom were told, that with, or without a deal they would be leaving the European Union on this day.  Only this week the government voted to go against what it had promised.

Nigel Farage, a member of the European Parliament, the previous leader of the United Kingdom Independence Party and the de facto leader of Brexit attended a rally in London claiming he is ready to continue the fight.  Here he is:

Audio clip of Nigel Farage – “We will win”

And please make no mistake, Brexit will happen.  Britain will leave Europe.

As confident as Mr. Farage sounds the reason that we can be so sure that Britain will, in fact, come out of Europe is that the Almighty God of Israel has a different purpose and destiny for those British Isles.  And although this message is not as loud it is was certainly at the rally today.  Fabulous banners were seen on Global News and on Time’s video of the event as seen in the below picture!

“Europe… as a united dominion… Britain cannot be included among them” – John Thomas, 1848

And although it is not on the minds of most of those involved in the Brexit debate it is the historical heart of the conflict.  Britain is historically a Protestant nation, the Protestant nation.  Protestantism was almost eradicated from much of Europe through the horrific events of the 16th and 17th centuries.  But in Britain, a protesting spirit developed and was never conquered.

If you subscribe to the Bible Magazine the latest edition that just came off the press examines the history of this conflict.  So, if you don’t subscribe now is your chance!  Just go to biblemagazine.com  Got to be done folks.  And if you already subscribe order another for a friend and help us get the message out.

Now in this latest edition of the Bible Magazine parts of a Jerusalem Post article by Melanie Philips are quoted.   The following is from that article as she describes the division in Britain today over Brexit:

“Tragically, these passions have split families and sundered friendships. The reason is that this is not merely a political argument.  It is a titanic civilizational clash between two fundamental world views.

The first seeks to defend the Western nation based on its discrete and particular history, language, religion, culture, and ethical values drawn from the Hebrew Bible and Christianity: a national identity expressed through laws passed by a democratically elected and sovereign parliament.

The second wants to destroy all that and replace it by a new world order under which the Western nation is superseded by trans-national laws and institutions, national borders are erased and biblical morality replaced by ideology – specifically, identity politics, moral relativism, and multiculturalism.

This nation-denying universalism is intimately connected to hatred of Israel, Judaism, and the Jewish people.”

These two fundamentally opposed world views are not just at war in Britain – the fight is the same wherever you go in the western world where countries were built on the principals and morals of the Hebrew Bible.  Certainly, the fight is clear here in Canada and to the south of us in America.

And the connection that Melanie Phillips makes between those trying to erase the influence of the Bible and the hatred of Israel is certainly true.  And it makes total sense if you despise the principles of scripture you would equally despise the people of the Bible.  And their return to the land of their forefathers as the prophecies said they would is clear living proof that the Bible is God’s true and living word.  There is no science that they can invent to muddy the waters on this.  We will come back to this.

Worth mentioning is the clarity, whether in Israel or Britain which side the Roman Church is on.  This is true both historically and currently.

In the latest issue of the Catholic Herald, the following was written by Andrew Cusack about the achievements of the Christian (read Catholic) democratic parties in Europe:

“Regardless of current controversies, the European Union must be counted as one of the Christian Democrats’ greatest achievements. The elimination of borders among the preponderance of European countries and their peaceful cooperation in an economic, social and political union seemed like a utopian fantasy when discussed by Christian Democrats in the 1920s. It was the anti-utopian pragmatism of Christian Democrats like Robert Schuman that allowed this dream to become a reality. Simply put, there would have been no EU without Christian democracy.”

In the words of scripture of course, “these have one mind, and shall give their power and strength unto the beast.”  Or as Melanie Philips calls it  – ‘nation-denying universalism.’ 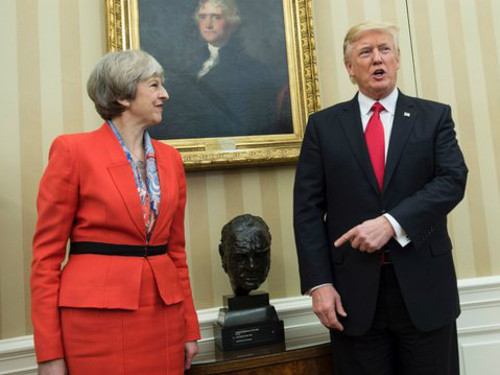 What many did not expect is the extent to which President Donald Trump would take up the fight against this ‘nation-denying universalism,’ and the seeming clarity which he and his administration see this.  And the fact is Mr. Trump loves the United Kingdom, the Queen and just about everything British.  He made sure it was big news when he put the bust of Churchill back in the oval office, and he has been clear he is not a fan of Britain being part of the European project.  What is strange is that for many in Britain, even in the Conservative party they seem embarrassed by Trump’s love.  But whether they want to admit or not, they will be needing it, and under Trump, America is ready and waiting to build the ‘special relationship’ to new heights.  In fact, to the chagrin of Europe, the Trump administration is pro-Brexit and excited to talk trade.  The following was Mr. John Bolton, Trump’s National Security Advisor: 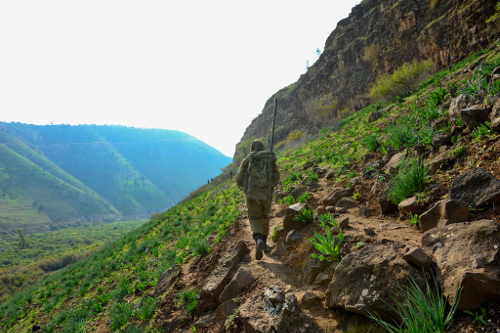 The Golan Heights – captured at the cost of many Jewish lives in the defensive war of 1967.

Although the Trump administration is looking to build stronger ties with Britain and the Commonwealth they are also strengthening their support for Israel to unprecedented levels.  The intimate connection between western civilization, the Bible and its people are seen.  We might find this surprising coming from an administration with a president that is on his third wife, is proud and has a potty mouth.  But the fact is that no previous administration was willing to do what Mr. Trump and his team have done with increased defense spending, the deployment of missile defense systems in Israel, the unwavering support for Israel at the UN, cutting funding to the Palestinians, cutting funding to UNRWA (which was completely biased against Israel), the recognition of Jerusalem as the capital of Israel, and then moving the embassy to Jerusalem even though in his words “the campaign against it was so incredible”, and now he has pushed ahead and recognized the Golan Heights as belonging to Israel.  The list just goes on and on.  And just recently on a trip to Israel the US Secretary of State, Mike Pompeo agreed in an interview with the Christian Broadcasting Network that Trump may be a modern Queen Esther, raised up to help save the Jewish people from an Iranian menace.  He then said that without a doubt the Lord was at work in Israel.  Truly unprecedented.

Well, Theresa May has said that the UK will not move its embassy to Jerusalem.  Just maybe the next prime minister will find it in them to change that.  And if you move the embassy you would be sure of finding a friend in the White House!

Either way, we can be sure that the Bible will continue to be in the news, for the Lord truly is at work.  So come back next week to bibleinthenews.com to see how.

The readings for today, September 27 are: 1 Chronicles 10
Ezekiel 23
Luke 20
Our website uses cookies from third party services to improve your browsing experience. Read more about this and how you can control cookies by clicking "Privacy Preferences".
X
X