It’s been another week of twists and turns in the fiasco which is Brexit. As the UK Parliament returned to the business of Brexit on Monday, Prime minister Boris Johnson looks like he has lost control already. In this episode of the Bible in the news we review the week and remind ourselves of Bible prophecy in relation to Britain and the EU.

On Tuesday this week the UK Parliament took control of the parliamentary agenda. Holding sway ‘Remain’ MPs passed legislation to prevent a no-deal Brexit forcing the UK Prime Minister to either have a deal in place before the UK can leave the EU on October 31st or alternatively to request a further delay to Brexit until January 31st 2020 if there is no withdrawal agreement approved by October 19th. 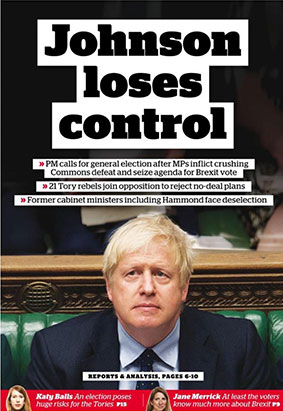 Mr Johnson stated on Thursday that he’d “rather be dead in a ditch than delay Brexit”. He has stated he will not ask for a delay to Brexit from the EU.

The bill is likely to be passed by the House of Lords and therefore receive royal assent — required for it to become law, before parliament is suspended next week.

This dramatically weakens the UK’s negotiation position and could de-rail any deal that is currently being worked on. Ironically a few months ago you may recall Tersea May took a deal to Parliament on various occasions only for MPs to vote against it.

Also this week The Conservative Party lost its majority meaning it is very difficult for them to pass any future legislation.

On Wednesday Boris Johnson then called for a snap election in order to remove the grid loc in Parliament – but this was also rejected by Parliament. His hand is being forced into either creating a deal or delaying Brexit once again. He has completely lost control.

Although there are some extreme measures open to the new prime minister in order to have a general election it looks like an almost impossible situation. Being pushed into a corner may make him take extreme measures. Mr Johnson could. for example, force a General Election, for example by calling a vote of no confidence in his own government. If he did this and then managed to win it with a majority Parliament this could lead the way to repeal the legislation preventing a no-deal Brexit.

At this stage, however many people in the country who voted to leave are asking where this leaves democracy. The people had voted to leave but it seems their leaders are unwilling to fulfil this desire.

We will wait to see what further twists and turns come about.

It is telling that in the midst of the political turmoil, on Thursday, Boris Johnson still found time to meet with Israeli Prime Minister, Benjamin Netanyahu and US Vice President, Mike Pence.

Boris Johnson and the Israeli Prime Minister talked about peace plans and about the threat of Iran. The Jerusalem Post reported that Mr Netenyahu stated:

With Mike Pence, the conversation was reported to be about trade with the US post-Brexit. Mike Pence tweeted after the meeting “As soon as Brexit is complete we look forward to having a new free trade agreement that will make the ties that bind our nations together even stronger!”

The Bible in the news

So what does all of this have to do with the Bible? Well as we have covered many times in past Bible in the New episodes, we believe that there is compelling evidence that suggests that Britain is mentioned by an ancient name of Tarshish in the Bible (see the June 8th edition http://www.bibleinthenews.com/Podcasts/657).

In the grand prophecy of Ezekiel 38 we have a picture of the state of the nations of the world just before the Lord Jesus Christ returns. Tarshish is mentioned as being separate from an aggresive European, Russian and Iranian alliance. She is instead, engaged in trade in the area of the Gulf with her political offspring, called “young Lions” in the prophecy. We believe this answers to the independent political offspring of Britain, America being one of her chiefest young lions. The agressive alliance of nations is depicted in the prophecy as coming against Israel – Tarshish is not against Israel at this time.

Therefore in the events this week with Britain speaking peaceably with Israel and talking trade with the US we see glimpses of the prophecies coming to pass before our eyes. However we still have the big question of Brexit. We do not know all the twists and the turns – and no doubt there may be more before the Lord comes, but the end state of the allegiances the nations will form before the Lord Jesus Christ returns seem clear. Britains role is not to be in an alliance with Europe. Her destiny lies apart from the EU project with its plans for further integration and an EU army.

So we watch and wait to see how the angels will work things out to bring about the prophecies of the scriptures of truth. We gain comfort in the signs of the times and know that they herald the return of the Lord Jesus Christ to the earth.

How humanity is in need of a righteous ruler to govern their affairs and lead them effectively. In the prayer of Psalm 72 we join the inspired writer who states:

“Give the king thy judgments, O God, and thy righteousness unto the king’s son. He shall judge thy people with righteousness, and thy poor with judgment.”

The Psalm ends with the praise of God:

“Blessed be the LORD God, the God of Israel, who only doeth wondrous things. And blessed be his glorious name for ever: and let the whole earth be filled with his glory; Amen, and Amen.”

We do indeed look forward tot he time when the earth will be filled with the glory of God and the era which we live in now, when it is filled with unrighteousness, wickedness and the false promises of democracy are over. The World In Crisis: WW3 Imminent! How long have we got? – Video post

The signs abound! – Christadelphians have been keen followers of Bible Prophecy for well over 150years – We correctly anticipated…

For more great articles like this and more visit : http://www.truebibleteaching.com/Analysis: Is the coolness which characterized the relationship between Israel… The ‘AMEN’ – What does it mean? You may be surprised! New Video Release

Video Description: Description: The traditional answer is “So be it.” The Word actually conveys two ideas from Revelation, the faithful and… Russia Prepares for War – “Art thou come to take a spoil” Ezekiel 38:13

This is a riveting address. It combines short video clips from world leaders, and gives a brief outline of Russia’s… Visit http://www.bibleinthenews.com/home/ for much more …. Germany joins France while Turkey pokes the Russian Bear The grand coalition against ISIS is… Video Description: A thoroughly researched study looking at this little-understood subject. The Speaker goes to great lengths to explain Demons and… In Or Out? – Bible Implications of a Brexit!

Given at the Christadelphian Enfield Ecclesia last night (19th June) The background to Britain’s relationship with Europe is well explained…. Tarshish, Brexit and the ‘Chequers’ plan: The latest plans to keep Britain attached to the EU are floundering Bible in the News Video Post

Tarshish, Brexit and the ‘Chequers’ plan The latest plans to keep Britain attached to the EU are floundering Listen in…